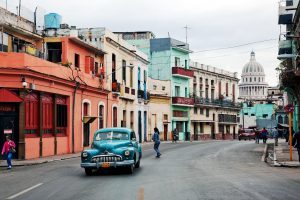 In late June 2015, Giancarlo Sopo got off a plane in Havana, Cuba, where his cousins waited for him in a 1980s-era Lada. He wasn’t sure what they looked like, but was immediately embraced by his relatives, who recognized him from photos. He stayed for ten days in Santos Suarez, a suburb just outside the city, in the same home where his family had lived for four generations.

Born and raised in the Miami neighbourhood known as Little Havana to Cuban exile parents, Sopo says he felt like a “sommelier that had never stepped foot in a vineyard.”

Today Sopo is one of four founders of the CubaOne Foundation, a nonprofit that takes groups of young Cuban-Americans to the island. Many, like Sopo, voiced their concern prior to President Donald Trump’s speech at Miami’s Manuel Artime Theater regarding the Obama-era easing of travel restrictions.  “Young Cuban-Americans in many ways are conditioned to think going to Cuba equals giving money to Castro, equals hurting the Cuban people,” Sopo says. “And that’s the wrong equation.”

This week, Sopo and other CubaOne members wrote an open letter to Trump outlining a series of recommended initiatives focused on family-centered policy and open travel. As Cherie Cancio, a founder and programming lead of CubaOne, puts it: “Any sort of setbacks or changes with travel restrictions do not make sense anymore for our community.” CubaOne isn’t a political advocacy organization, but with a policy retreat possible, its leaders decided “they need to speak up and be a voice on behalf of our organization, but also as a millennial group of Cuban-Americans,” Cancio says.

CubaOne isn’t alone in speaking out for the Cuban community. Also this week, 55 Cuban businesswomen on the island wrote a letter asking Ivanka Trump to work with her father to preserve the Cuba opening. “A setback in the relationship would bring with it the fall of many of our businesses and, with this, the suffering of all those families that depend on them,” they said in the letter.

Indeed, many younger Cubans think differently from the Bay of Pigs Veteran Association, which endorsed Trump during the campaign in hopes he’d reverse the Obama policies. Cancio, for instance, recently returned to the island for the first time in 18 years. As a 4-year-old, she had traveled to Cuba, where she swam in the pool her dad had used during his time on the Cuban national water polo team and slept in the bed that had once belonged to him. Though she had hoped to return, travel restrictions made it difficult. Finally, at the age of 22, she walked up to her aunt’s house and tearfully met four cousins for the first time. She, along with the rest of the Miami Cuban community, worries the trips she now makes several times per month to the island might be restricted to yearly visits.

“Obviously, as the children of exiles we’ve learned about Cuba our entire lives,” Sopo says. “But I think it’s important to see things for yourself. You walk away with your own conclusions.”