US welcomes 300,000 in exchange programme 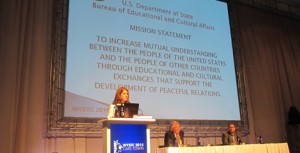 The US welcomed around 300,000 international participants on the J-1 visa programme in 2014, according to figures unveiled by Deputy Assistant Secretary for Private Sector Exchange, Robin Lerner, who urged greater diligence on English language ability and more transparency in placements.

The summer work travel (SWT) programme was comfortably the largest segment of the J-1 visa scheme, with 90,287 participants.

As DAS Lerner explained in an interview with StudyTravel Magazine last year, the SWT was capped at its current level to focus on the quality and transparency of the programme.

Speaking in a special Update on the J-1 Visa Program session at the recent World Youth and Student Travel Conference (WYSTC) 2015 in Cape Town, South Africa, Lerner refused to be drawn on whether the cap would be removed or amended from its current level, but praised J-1 sponsors for driving improvements in the scheme and implementing her reforms.

Additionally in 2014, there were 54,555 college and university exchange students, 33,031 research scholars, and 23,446 international secondary students on exchange visas last year, according to the data.

Responding to sponsors’ questions about whether increasing enrolments at secondary level on a full F-1 study visa had impacted on the secondary school element of J-1, Lerner said that the sector was now holding steady, but conceded it had fallen from a previous high of around 28,000 students.

A report on international enrolments at secondary level by the Institute of International Education (IIE) last year showed that as of October 2013, 66.6 per cent of those enrolled were on F-1 visas pursuing full-fee academic programmes, with the remainder on J-1 exchange programmes.

A quarterly working group has been established with colleagues responsible for the F-1 visa to collaborate on issues such as student welfare, Lerner said.

She said the biggest current challenge to be addressed in the J-1 programme was low levels of English ability among some participants, which she said made them vulnerable.

She also addressed the issue of securing suitable accommodation for international students on work placements through SWT, urging greater transparency and lower fees. “If we can get housing truly inculcated in the programme, it will be much better.”

The role of agents in the support of the J-1 exchange programme was welcomed, and Lerner said she was looking for continued good relations between US sponsors and their foreign partners.

Within the SWT segment alone, Thailand was the most prolific sender country on 7,128 students, with Ireland, Bulgaria, China and Romania completing the top five.

Addressing the relatively low numbers of African participants in the J-1 scheme, DAS Lerner said, “Africa is important and we know it is underserved.” Acknowledging that the usual full pre-programme payment mechanism was potentially a barrier to greater African participation, she added, “It is important to see diversity and I would love to see creative efforts to address the upfront payment issue.”