All in-destination activities up for young travellers, but nightclubs face the music

Young travellers are seeking more activities and experiences while travelling, according to findings of WYSE Travel Confederation’s global New Horizons IV Survey of travellers under the age of 35. The New Horizons IV Survey indicates that the desire for in-destination experiences and activities has increased over the last five years. Young travellers are doing more of almost everything except one thing.

When comparing the same set of activities in 2012 and 2017, results showed that the average level of participation in in-destination activities had increased by 26%. The largest increase was seen in the activity of ‘living like a local’, which rose from 28% in 2012 to 51% in 2017. While participation in sport-related events and activities remained stable, visiting nightclubs dropped. 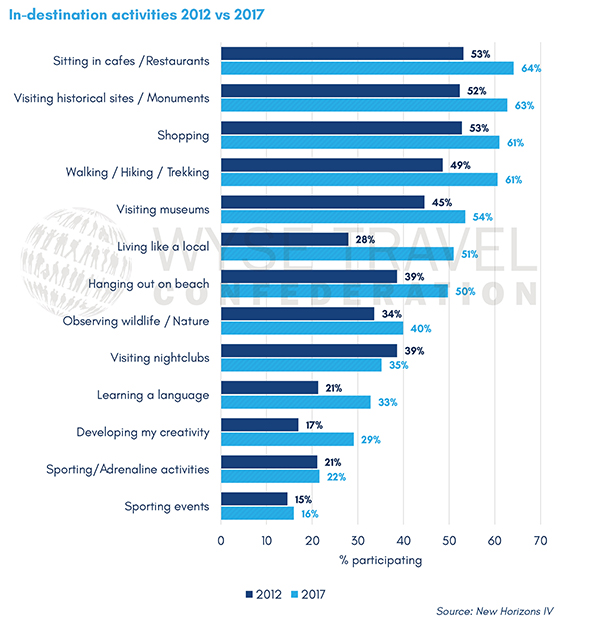 “Music is an important cultural currency for many young people and a major reason to visit nightclubs. It’s a way to get a feel for the local creative culture, so it could come as a surprise that young travellers are frequenting nightlife venues less so than just five years ago,” said David Chapman, Director General of WYSE Travel Confederation.

The drop in visiting nightclubs is also surprising given the growth of the music industry overall in some countries. UK Music reported in its 2017 Measuring Music report that the UK music industry had grown by 6% in 2016, contributing £1 billion to the UK economy. Live music specifically was up by 14% in 2016. In the Netherlands, the Amsterdam Dance Event (ADE), the “leading electronic music platform and the biggest club festival in the world for the whole spectrum of electronic sub-genres” was estimated to contribute €55-60 million toward the local Amsterdam economy in 2016.

So, what exactly is driving a dip in nightclub visitation for young travellers?

One factor is festivals. According to WYSE Travel Confederation’s New Horizons IV Survey, events and festivals are now one of the top ‘splurges’ for young travellers.

Another factor is the changing landscape of nightlife venues in cities. The 2012 report Dance-onomics: The economic significance of EDM for the Netherlands, which looks specifically at the contribution of Electronic Dance Music (EDM) to the Netherlands, found that while EDM shows and activities have increasingly benefited some areas, including festivals, DJs, producers and agencies, other areas such as recorded music and music venues have lost market share. Specifically, drops in visitor numbers (-57.4%) and average spending (-10.9%) for clubs and music venues in the Netherlands were noted between 2007 and 2012. Dance-onomics attributed the drop to fewer “clubs and discos”, thus revealing a different nightclub landscape in the Netherlands.

Changes to city nightlife and recognition of its cultural and economic value have been attracting more attention lately as cities appoint ‘Night Czars’ or ‘Night Mayors’ to represent the wide range of stakeholders of urban night-time economies. The challenging role of such nightlife ambassadors is illustrated by the recent case of London’s borough of Hackney. London’s Night Czar, Amy Lamé, was fervently criticised for her inability to represent the interests of local businesses, artists, and residents of Hackney Council to reconsider their plan to impose restrictions on business hours and implement an 11pm curfew on all new clubs, bars, and pubs.

“It’s well documented that certain factors are putting pressure on late-night music venues in cities around the world,” said Julia Jones, founder and CEO of Found in Music and affiliate of Sound Diplomacy, a global advisor on music cities and market development.

Local culture, including music, is part and parcel of the more innovative accommodation concepts seen in the youth tourism sector over the last few years. “With the cultural programming that some of these places offer, it’s a great night in, rather than a night out at a club,” said David Chapman of WYSE Travel Confederation.

Fabrika Hostel in Tbilisi is bringing local resident artists in contact with travellers interested in discovering local creatives and brands like Sydell Group’s Freehand and THE LINE excel at delivering unique cultural elements of the locale to discerning travellers – interestingly, one of the ways they are doing this is with in-house radio and podcasts.

“Music contributes to the health of creative cities and these are the cities that young people want to live and work in,” said David Chapman. “Music consumption, in general, has changed drastically since the Internet, so it is interesting to see travel accommodation providers in the youth space utilising old mediums, like radio, to connect with visitors during their stay. Perhaps nightclubs and hostels should consider collaborating?” he questioned.

New Horizons IV: A global study of the youth and student traveller analyses the responses of more than 57,000 young travellers from 188 countries and territories to questions about their last international trip. The publication is free for members and available for purchase on the WYSE Travel Confederation website.