The impacts of COVID-19 on the youth travel industry

STR: The impact of COVID on European hostel and hotel industry

Some hotels remained open, but most hostels closed their doors from 23 March. Although London officially re-opened on 4 July, many hostels in the market remained closed until August due to a combination of low demand and difficulty adhering to social distancing guidelines. Despite a sluggish start to recovery, accommodation performance patterns in London and comparable markets suggest performance in the coming months will improve.

A slow start for hostels
Hostels in the U.K. capital posted 13.5% occupancy in September; the weak demand erased pricing power and ADR declined 27.5% from 2019 to £13.72. While market performance was quite poor, trends in similar hostel markets in Europe suggest relief could be coming.

Hostels in Amsterdam and Berlin observed similarly weak performance during lockdown and in the first month after it eased. In both cases, hostel occupancy took a longer time to recover but jumped significantly and outperformed hotel occupancy in the months following market reopening. 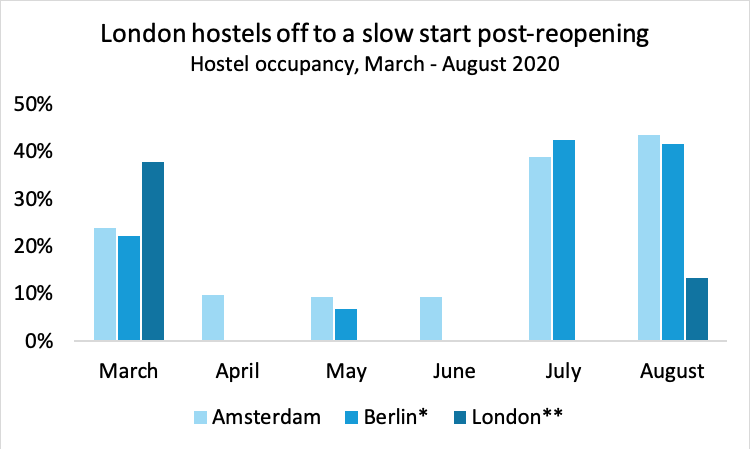 Hostel occupancy in Amsterdam hovered around 10% from April to June before climbing nearly 30 percentage points in July to reach almost 40%. Berlin followed a similar pattern and occupancy rose from 6.9% in May to over 42% in July (STR did not report on Berlin in April and June due to a high number of property closures).The European capitals maintained that level of occupancy moving into August as many travelers looked to staycation before summer’s end.

If London hostel demand follows the pattern found in mainland Europe, operators could expect to see some lift in occupancy in September and October. However, the end of summer may pose a risk to this forecast: As the weather cools and schools resume, holiday travel also will likely ease.

Looking to daily hotel data gives hostels a more real-time view of performance and in this case, hostels should be happy with the comparison. Despite the end of summer and continued lack of group demand, London hotels maintained stable occupancy levels throughout September, with distinct spikes on Saturday as leisure travelers braved the city. 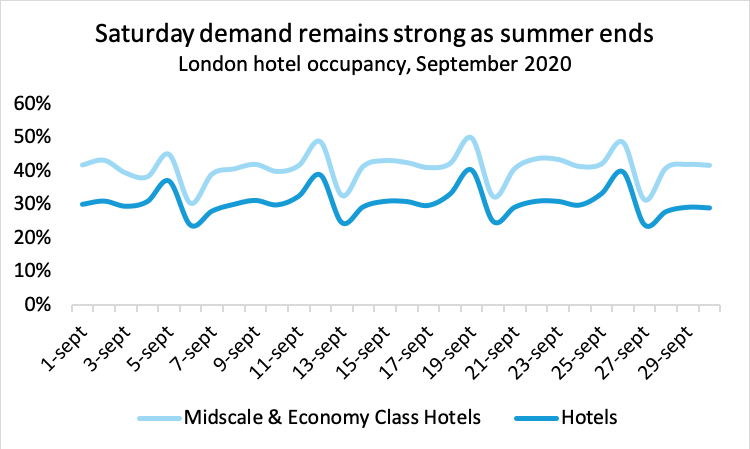