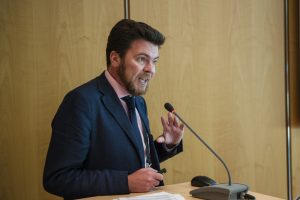 Nick Greenfield, Head of Tour Operator Relations for ETOA, passed away last weekend after a long battle with cancer.

David Chapman, Director General of WYSE Travel Confederation said, “Nick was an incredibly knowledgeable advocate of tourism as a whole and his loss to the industry is immense. We send out best wishes and condolences to his family and colleagues.”

Greenfield had joined ETOA full time in 2010 but remained a passionate tour guide at heart.

A statement issued by ETOA said: “Nick combined a hunger for culture with a passion for sharing his knowledge and enthusiasm. This ranged from expositions on the Sienese Trecento to planning games to enthuse American schoolchildren in the Louvre. He knew his subject: there was not a country in Europe he had not visited and understood; in Italy, his first love, there was not a province that he did not know. He was a gifted linguist. In French, German, Italian, Spanish, Flemish, Croatian and Slovenian he had full fluency “I am not” he conceded to an amazed Belgian ‘a normal Englishman’.”