Betty Lane, founder of SCCE Australia, has just left us.

For all those who work in the field of Academic year programs, she was known and recognized for her insatiable work for long term exchange programs.

American by birth, and after having decided to settle down in Australia a few years after her studies to start a family, she « imported » to Australia the concept of long term exchange programs, and all that she learnt during her good and loyal years at CIEE New York and Paris.

Betty set up the Experiment in International Living in Melbourne, Australia.

At this time, Australia was then a country that did not know long term exchanges.

She structured these types of programs, allowed thousand of young Australian students to discover Europe and the world, while at the same time welcoming just as many young foreign students who were marvelled by this country, that seemed to be at the other side of the world.

Betty Lane brought together youth from all of the continents.

And to a certain point she brought Australia closer to the rest of the world.

Her loyalty and her convictions, drove her to always work with the same partners, thus building bonds much stonger then just professional relationships.

Her credo was always the quality of stays, teaching respect for others, open-mindedness to other cultures, and tolerance.

She can be proud that around the world, her partners and friends are keen to continue her example, whether in Germany, in France, in America or in multiple other countries around the Globe. 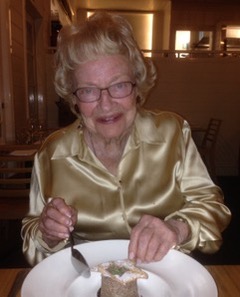