Comparing average daily rates between hostels and hotels always will be an apples-to-orange exercise, as a hostel bed in a shared dormitory costs less than a private hotel room. In London, for instance, hostels charged £19.72 per bed while hotel rooms in the city commanded £154.32 on a trailing 12-month basis.

However, given the growing popularity of private hostel rooms and the upmarket “poshtel,” is the gap between London hostel and hotel ADR decreasing?

While a reasonable assumption, our data reveals otherwise.

Hostels fared better compared to Economy and Midscale class hotels, with hostel ADR growth outpacing that of the lower tiered hotels for the past six months. However, Economy and Midscale hotel class room rates of £78.44 are still four times as expensive as the average hostel bed. 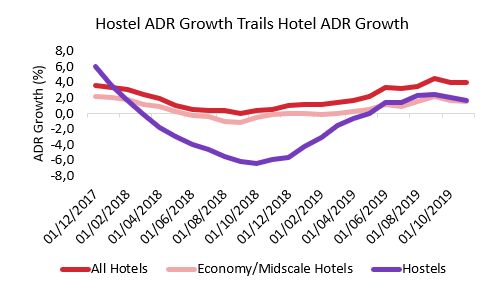 While rates vary dramatically between hostels and hotels, occupancy between the sectors is similarly high, with running 12 month occupancy exceeding 80% each month. Hostel occupancy drew even with all hotel occupancy for the 12 months ending November 2019, and both sectors trailed Economy and Midscale class hotel occupancy by 1.4 percentage points. 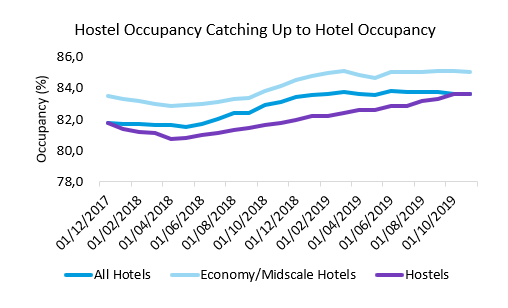 Given the similarity in occupancy between sectors, ADR is the defining difference between Revenue per Available Room (hotels) and Revenue per Available Bed (hostels). Despite hostel occupancy growth in excess of 2 percent for the past eight months, the gap in RevPAB and RevPAR continues to widen. Gap growth is noticeably slower between hostels and Economy and Midscale class hotels, where the difference in RevPAR and RevPAB increased only £2 over the past two years.

Correspondingly, the difference in RevPAB and RevPAR of all London market hotels grew £9, suggesting that higher end hotels are raising rates more rapidly than lower end hotels and hostels. 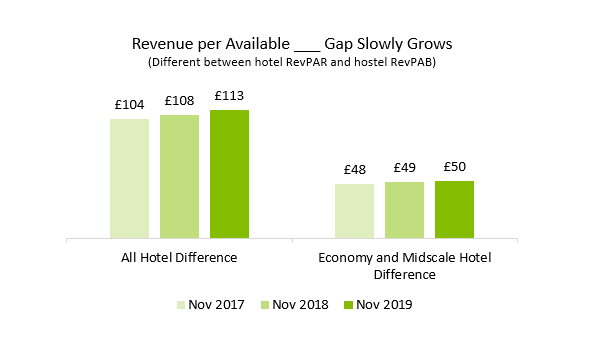 The gap between hostel RevPAB and Economy and Midscale class hotel RevPAR appears stable, an encouraging sign as these lower tiered hotels are often hostels’ closest hotel competitors. As hotel rates outside of the lower tier classes continue to climb relative to hostel rates, the sector should look for boost from budget conscious travelers.

Not yet a member?

Join our global community and grow your business. Members of WYSE benefit from free access to the latest industry research, discounts to our events, year-long networking opportunities, heightened brand visibility and much more.