Academic Language Solutions (iTEP) of Guilford, Connecticut recently surveyed program sponsors, agents, educators and employers to determine what skills they would like to see measured in standardized English tests. Over 800 surveys were distributed during the months of October and November.

Kevin Morgan, Chairman of Academic Language Solutions, who distribute English tests and conduct related research, said, “There are many standardized tests for companies to choose from, but the skills they measure are limited, often by the technology used to conduct the tests. We wanted to discover what was really most important in the marketplace, and go about finding and distributing the most meaningful tests.”

There are four basic skills to assess in language acquisition. They are reading, writing, listening and speaking. Most tests offer some combination of these skills in their assessments. The Academic Language Solutions research asked respondents to identify the most important skills to have measured when screening students, exchange visitors and potential employees. Those surveyed were presented with a list of the four basic skills plus two popular combinations of skills (reading/listening, and speaking/listening), and asked to choose the most important.

Tests that measure Listening and Speaking were the tests of choice for two-thirds of those responding. Speaking skills alone were preferred by another nine percent; Listening skills were chosen by six percent. So, on a combined basis, 81% of respondents wanted some combination of Speaking and Listening skills (i.e. conversational skills) tested as indicators of success on exchange-type programs. 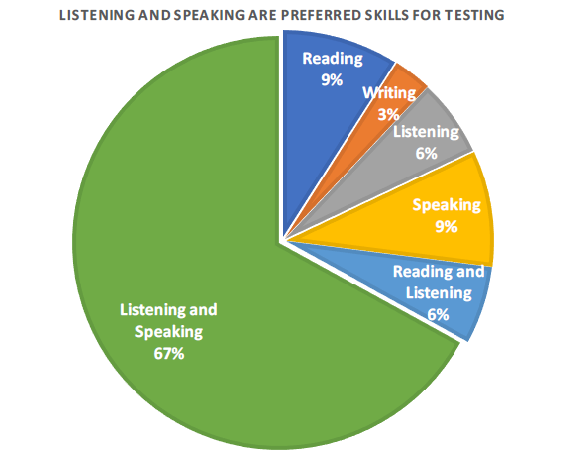 Because of technical difficulties, few tests measure Speaking skills. Those that do, usually rely on in-person conversations that need to be pre-scheduled at limited, and often distant, test centers, resulting in high expenses for test takers. The one series of tests that use cloud-based technology (including human, trained graders) is iTEP, International Test of English Proficiency, based in Los Angeles. Perry Akins, co-founder of iTEP, explained that “We wanted to create a suite of exams that were online, could be taken on-demand, were economical, scored quickly and tested multiple skills. Conversation skills were a must to be offered. Other testing companies just didn’t adequately cover this.”

Morgan adds, “After spending years operating and observing exchange programs, I really believe that the weak link in selecting students for programs, is English screening. A standardized, objective exam is a must. Self-screening by agents and sponsors is not satisfactory and carries too many risks.’