When reporting, writing and presenting on data, STR analysts frequently switch between four different time aggregations: monthly, running three month, running 12 month and year-to-date. Aggregations can produce different results, which can lead to confusion about which is best to use (answer: it depends!). The uses and interpretation of each time configuration are detailed below, along with a look at the Amsterdam hostel market as an example.

As its name suggests, monthly data is a view of a given month’s performance. Monthly data is inherently seasonal: due to weather, school break schedules, holidays, events and calendar shifts, the data may spike in some months and fall in others, irrespective of actual market performance. Year-over-year monthly data is best viewed one month at a time in comparison to a hostel’s market or competitive set.

A time trend highlights seasonality in Amsterdam occupancy. While market occupancy peaks in July, it remains high through October before declining precipitously as the weather cools. From October to November, occupancy falls an average of 17 percentage points, the largest month-to-month decline all year. Amsterdam hostel occupancy fell 0.2% year-over-year in October, marking the fourth straight month of year-over-year declines. 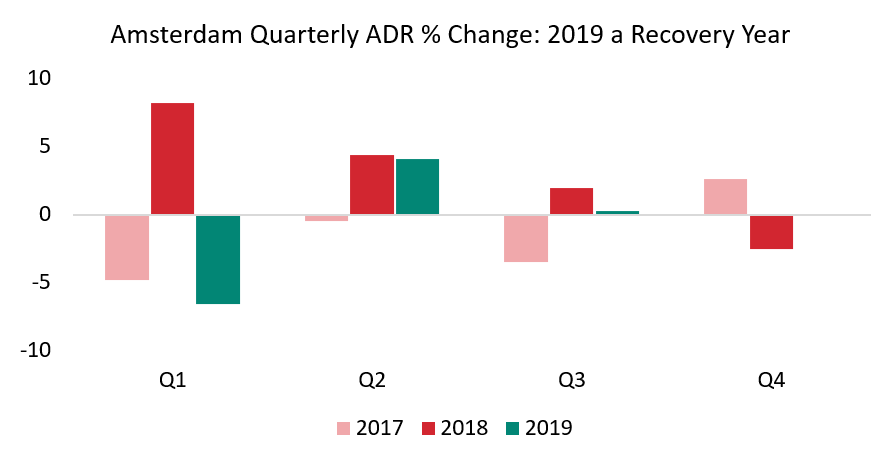 Quarterly ADR growth in Amsterdam visualizes the pitfalls of an amazing year, which the market experienced in 2018. The following year is what STR refers to as “hard comp”; performance was so good in 2018 that even normal performance in 2019 looks poor in comparison. Q4 should yield interesting results, as it was the only quarter to see ADR decline in 2018, which should make growth in 2019 easier to come by on a year-over-year comparative basis.

For seven of the past 12 months, Amsterdam RevPAB growth has been near zero, changing year-over-year by less than 1 percent. Contrast this to monthly RevPAB growth, where spikes in March, April, and October make discerning trends difficult.

The last time aggregation STR uses regularly is year to date (YTD), which is most useful for obtaining the most accurate picture of current year performance. With the exception of December, 12MMA aggregations will include prior year data, and monthly and R3 snapshots won’t capture the full year. YTD data is best used at least four months into the year; prior to that, R3 or monthly data would serve nearly the same purpose. 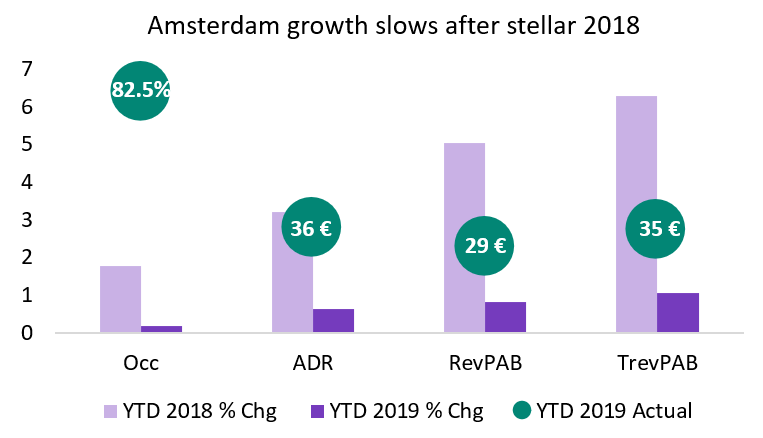 While Amsterdam hostel performance has improved year-over-year in 2019, the growth is modest compared to 2018. Only TrevPAB has grown more than one percent year-over-year. The last two months of the year will be crucial in determining if Amsterdam is able to end 2019 on a high note.

STR’s four time aggregations each serve their own purpose in helping to discern performance. For Amsterdam in particular, all four aggregations suggest 2019 has thus far been a year of low, slow growth, particularly in comparison to robust 2018 performance.