In search of the aging backpacker

We’ve been tracking the quintessential youth traveller since 2002 – the backpacker. In 2017, data from WYSE Travel Confederation’s New Horizons Survey of the youth and student traveller indicated the trend of a long and slow decline of the backpacker travel identity. However, something else came to light: backpackers are holding on to the identity as they get older.

Short on time or dislike reading graphs? Here are the key takeaways:

Youth travel has long been associated with the emblematic figure of the backpacker: the independent solo traveller staying in hostels to spend long periods on the road. Over the four waves of WYSE Travel Confederation’s New Horizons Survey research however, one of the most notable trends has been the decline of the backpacker – or at least of young travellers associating themselves with the backpacker label. What has happened to the backpacker over the years? We dig into the data to try and find out.

The proportion of young travellers (16 to 35) calling themselves ‘backpackers’ has slowly but surely declined over the course of the New Horizons Survey research programme. In 2002 over 30% of all travellers identified themselves as backpackers, compared with just over 14% in 2017. Even though the proportion of backpackers has fallen, the growth of global tourism means that their numbers have changed very little: there were an estimated 45 million international backpacking trips in 2002, compared with 44 million in 2017.

The fall in the proportion of backpackers is also evident if we follow the same cohort of people, born at the same time, over the years. Taking the group of respondents born around 1982, for example, we see almost a third of these were backpackers at the age of 20 in 2002, but by 2017 less than 6% of these now-35 year olds were still backpacking.

How have backpackers changed?

Changes in travel style are also evident, with the proportion of backpackers using hostels generally falling over time. This might indicate some change in accommodation choice, but also the decline of the term ‘hostel’ as a generic term for youth travel accommodation, and the increased mixing of accommodation types in a single property. Use of both independent and Hostelling International hostels fell between 2002 and 2017, with the decline particularly marked for the latter. Backpackers are now making use of a wider range of accommodation options, including sharing economy platforms like Airbnb (21% used these in 2017).

Over time, the average age of backpackers using hostels has generally risen, although there was a fall between 2012 and 2017.

If we look at the same cohort born around 1982, then we see a slight rise in hostel use between 2002 and 2007, but a marked decline thereafter. 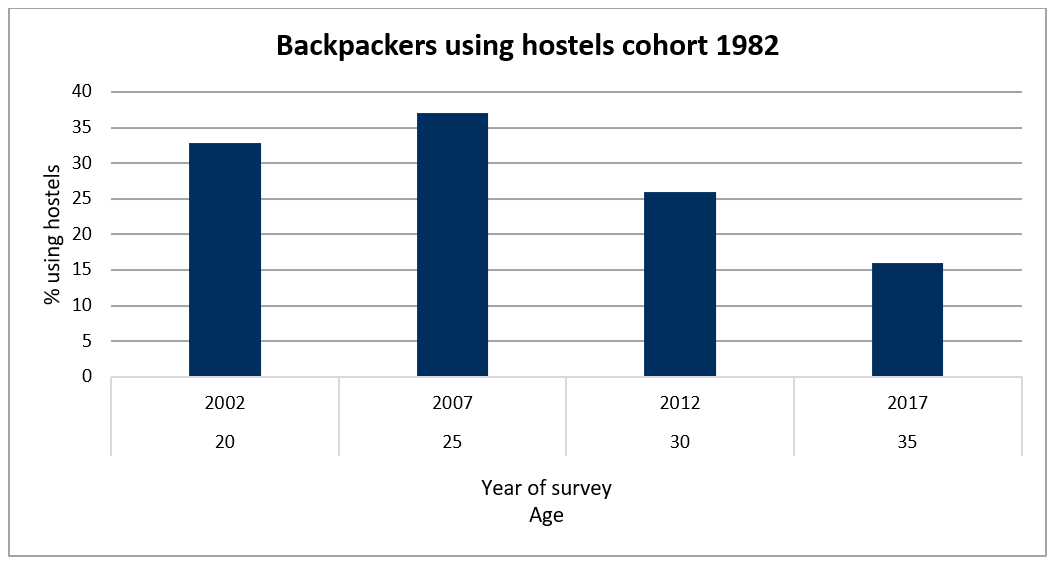 Over the short term, backpacker destinations tend to be influenced by a wide range of factors, including exchange rates, visa policies and fashion. Over the decade between 2007 and 2017 the general regional distribution of backpacker trips was fairly stable. The only world region to register a significant increase was Asia, whereas Western Europe lost market share. This is related to more backpackers venturing further afield over time.

If we compare the top 10 countries visited by backpackers in 2007 and 2017, we see that the USA has overtaken Australia as the main backpacker destination. This may be related to changes Australia made in 2016 to the tax rules for backpacker/working holidaymaker income, which reduced the possibilities for tax-free earnings. 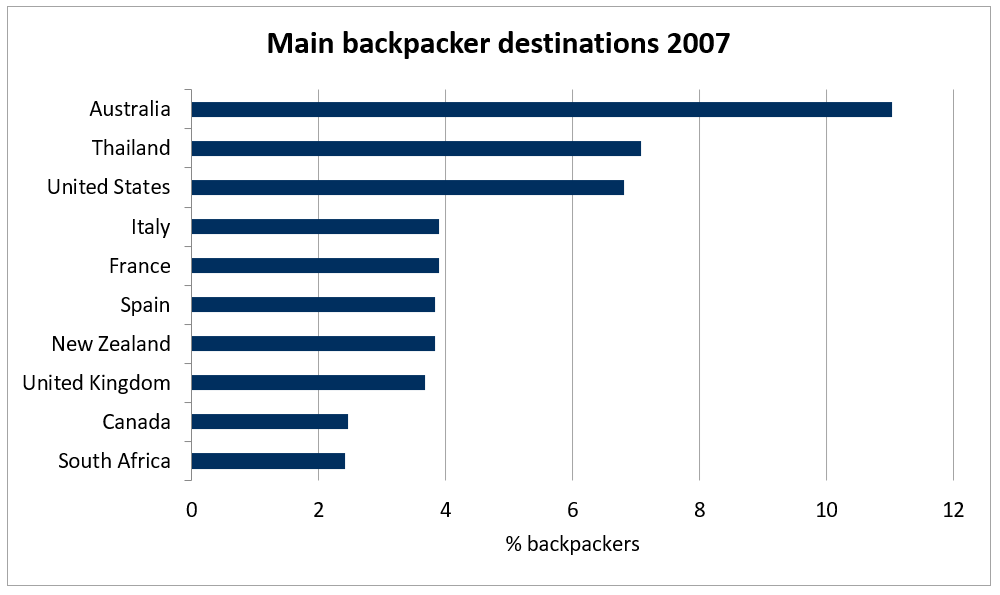 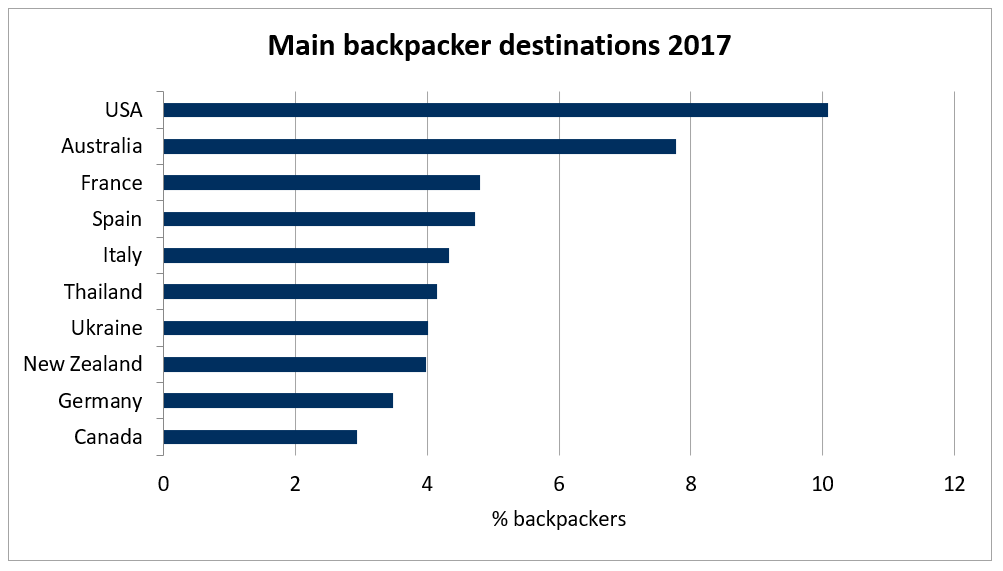 Over time, as the average length of backpacker trips has fallen, so have the number of different activities undertaken. We can see, for example, that visits to both museums and nightclubs fell significantly between 2002 and 2017.

The fall in nightclub visitation is evident for all age groups over the New Horizons Survey waves.

For the cohort of backpackers born around 1982 there has been a steady decline in visits to nightclubs. 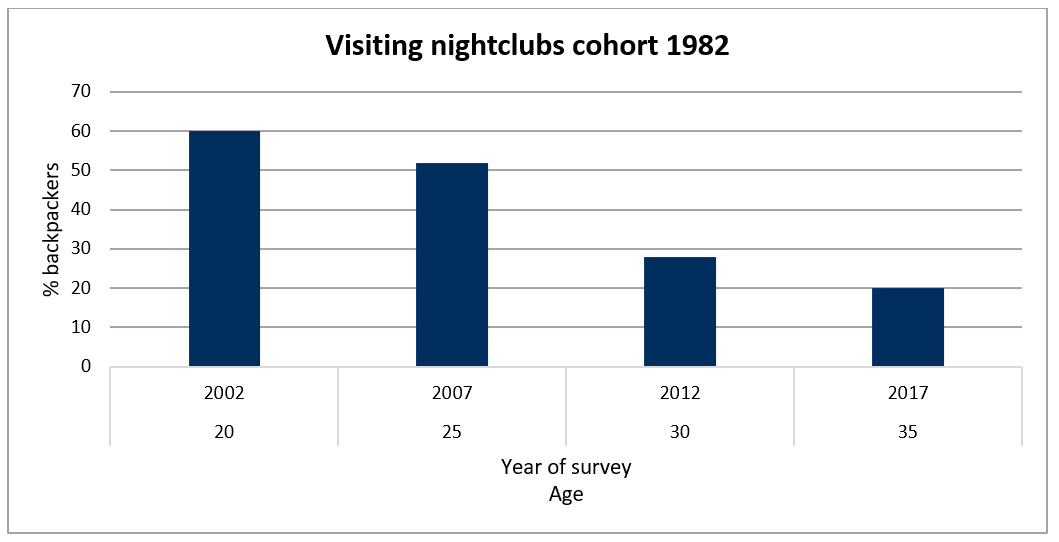 One activity that has shown a marked increase in participation over time is language learning, which grew from just under 12% of backpackers in 2002 to over 32% in 2017.

The biggest growth in activities for backpackers relate to the idea of ‘living like a local’, just as for youth travellers as a whole.

Total trip spending of backpackers (including travel to the destination) rose significantly between 2002 and 2007, and stabilised thereafter. This reflects the impact of the global economic crisis, which dampened spending in the years after 2007.

The effects of the economic crisis are also visible in the significant growth in backpackers earning money to support their travel. Even so, the money earned while travelling does not offset too much of the cost: the average backpacker travelling for three months or more only covered about 10% of their total expenses this way in 2017.