LONDON – While market-level numbers are a good indicator of overall performance, individual property performance can vary widely depending on location, age and other such characteristics.

One such characteristic is class, the categorization of properties by Average Daily Rate (ADR). For hotel reporting, both chain and independent hotels are assigned to one of six classes based on achieved rate. While hostels have not been categorized into classes, upper and lower tiers can be approximated by looking at market ADR and separating properties according to their rate relative to market rate. Upper tier properties achieve above-average ADR and lower tier properties see below-average ADR.

As the spectrum of hostel offerings continues to expand, studying performance by tier can help operators understand what strategies and revenue management techniques may or may not be working.

What’s in a tier?

In hotels, property attributes often vary by class: a luxury hotel typically boasts amenities such as a spa, gym and restaurant, while economy properties offer little beyond a room.

At the London market level, ADR averages £19.82, but the gap between upper tier and lower tier hostels is nearly 30% and growing: The gap measured 25% in January 2018 on a rolling 12 month basis and was 29% in the 12 months ending September. 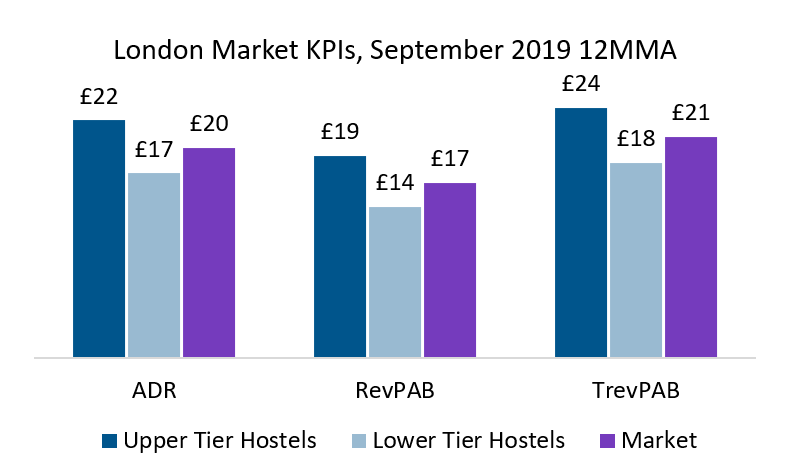 Discrepancies in F&B and other ancillary services between the tiers appear in Total Revenue per Available Bed (TrevPAB). Upper tier RevPAB is £4.84 higher than lower tier RevPAB, but the gap between tiers in TrevPAB widens to £5.21, suggesting that amenities at upper tier properties are costlier or more frequently purchased. 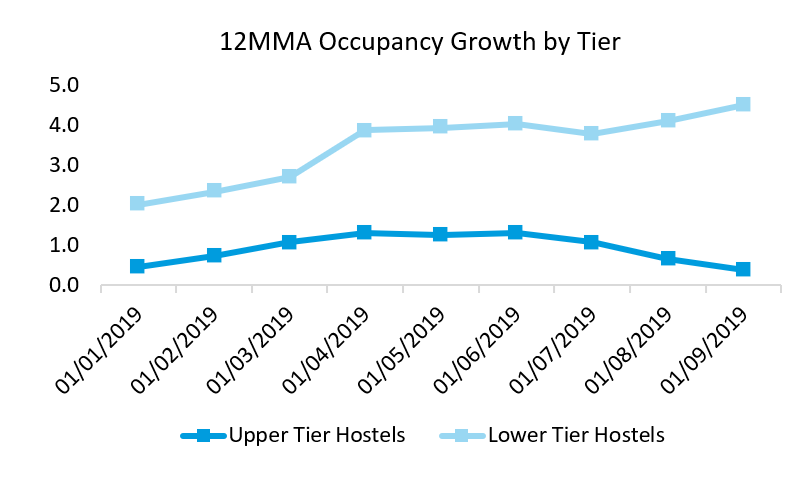 Strategizing for the future

WYSE teams up with STR to provide members with insights into city performance data on hostel occupancy and bed rates.

In the first monthly report of its kind for WYSE Travel Confederation, STR’s data on London hostels show that despite average daily rates being down, occupancy remains steady.