LONDON—With the release of July 2019 performance data, London hosteliers may be in for a surprise. July, which historically is one of the highest-demand months each year, experienced losses in occupancy, average daily rate (ADR), and revenue per available bed (RevPAB). Ancillary revenue declined year-over-year as well, leading to a loss of total revenue per available bed (TrevPAB).

Weak July performance is surprising on a number of fronts. With year-over-year losses in three of four KPIs last July (occupancy grew 0.3% in July 2018), this month should have heralded easy comps for revenue-based metrics. Year-to-date performance has been strong as well: London hostels increased RevPAB 5.5% and TrevPAB 6.3% from 2018, making July a conspicuous outlier. 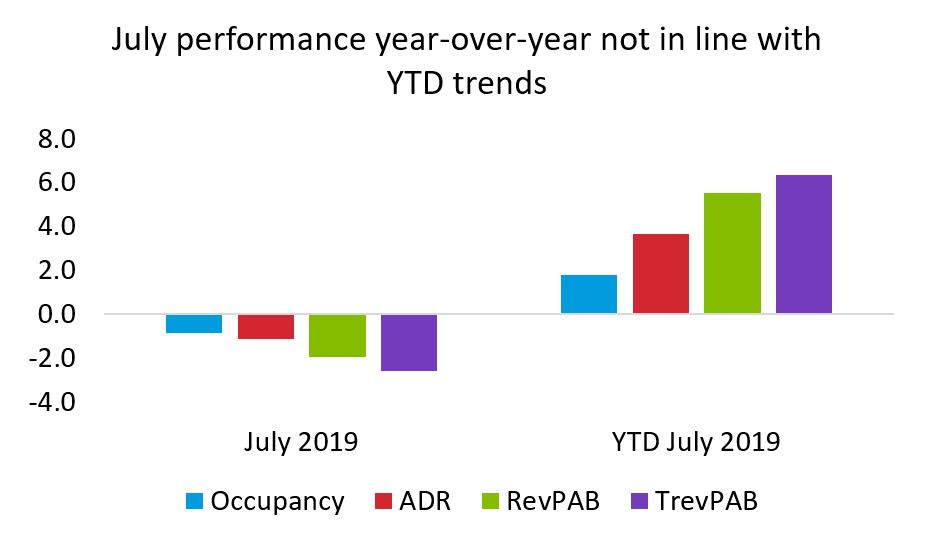 Several factors—some short-term, others potentially longer-term—could be contributing to the market’s struggles.

No room at the inn

July 2019 occupancy was 89.2%. While this mark was the lowest July occupancy of the past three years, it was still the fourth highest monthly occupancy experienced over that time period. Such high average market occupancy suggests that many hostels are selling out multiple nights.

The flip side to such high occupancy, however, is often lackluster growth. (It’s difficult to sell more beds if beds already are sold out.) That was the case this July, when occupancy fell 0.8% from July 2018.

Seventeen of July’s 31 days saw London temperatures above the historical average, with a record-breaking heat wave occurring late in the month. While occupancy remained high, it is possible hosteliers dropped rates in order to entice wary travelers to a city not commonly known for air conditioning. ADR declined 1.1% year-over-year, landing at £21.41, the second-highest rate in 2019.

The value of the pound sterling has been quite volatile in recent months as the UK grows ever closer to the Brexit deadline with no clear outcome in place. July in particular saw a steep end-of-month depreciation of the pound relative to the Euro. 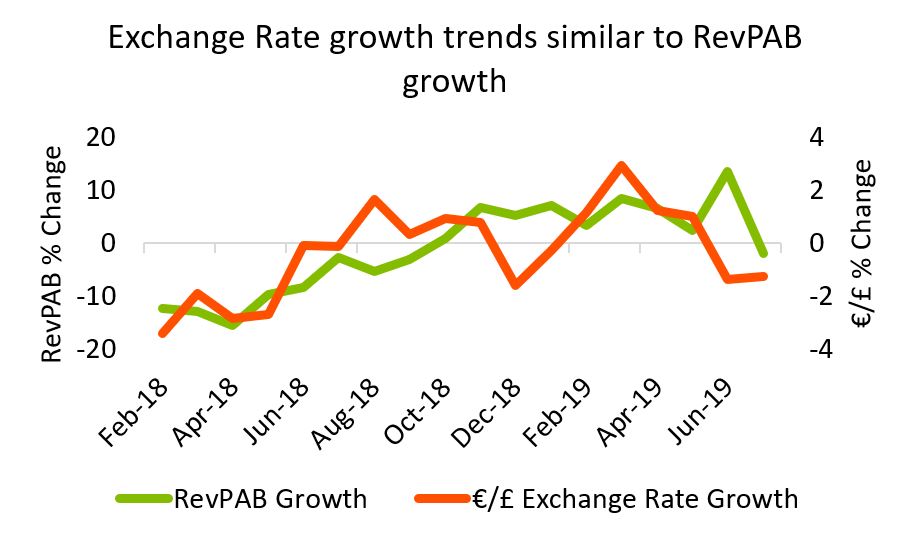 Exchange rate fluctuations may not directly influence hostel performance. A more likely scenario may be some mysterious third factor affecting both metrics.

TrevPAB declined 2.6% year-over-year, landing at £23.46 in July 2019. This is unusual, as ancillary revenue often experiences growth rates much stronger than RevPAB, which fell 1.9% year-over-year. The 0.6 percentage point difference between the two rates suggesting that hostel guests paid less for their beds and purchased fewer amenities during their stay.

The reasons for TrevPAB’s decline are more opaque than the other metrics. It’s possible that fewer guests translated to fewer opportunities to earn other revenue, although given the market’s 89.2% occupancy, this seems unlikely.

It could be that properties discounted amenities as an additional enticement to tempt travelers to brave the heat, although if this is the case the plan backfired, as Other Revenue declined year-over-year.

Perhaps most baffling is the exchange rate: With the pound depreciated against the Euro, European guests would find it relatively cheaper to indulge in a beer, rent a bike or enjoy any other number of hostel amenities. Yet evidently they did not.

Whatever the reason, London hostel performance this month may be frustrating but is, hopefully, a minor setback in an otherwise strong 2019.