Youth travel through the eyes of a presidential parent

Youth and ‘the younger generation’ were among the most-used buzzwords of the World Travel & Tourism Council’s 2019 Global Summit- not least by the Summit’s distinguished guest of honour, former US President Barack Obama.

Hosted in the city of Seville, Spain, attendees of the Global Summit warmly welcomed President Obama for an intimate and personal discussion with Chris Nassetta, Hilton President & CEO and WTTC Chairman, on the social, cultural, and economic value of tourism. The conversation also touched on much more, including climate change, borders, government facilitation of tourism, the current state of media, and the impact media and the Internet have had in enabling people to surround themselves with opinions and perspectives that are just like your own. 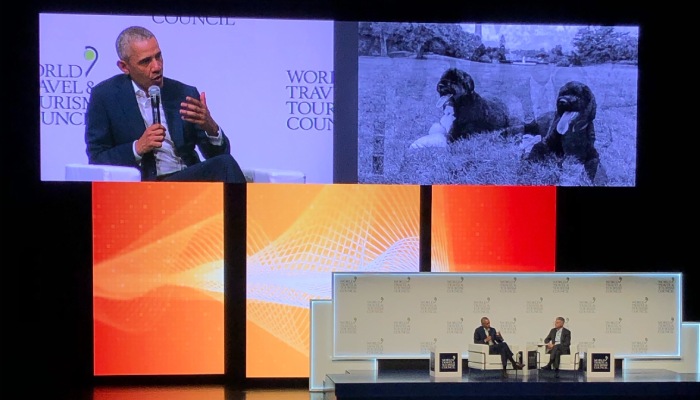 Youth travel, through the eyes of a parent

When asked about his most memorable travel experiences, President Obama reflected on the many experiences he has had abroad as President, but also as a young traveller. Most cherished, however, is the time he has spent travelling with his children.

“Travelling makes you grow, but as a parent, when you are able to watch that sense of discovery in your children’s eyes – that is more special than anything else.”

“Because I have daughters, I know travel for women poses some specific dangers around safety and security when it comes to the attitudes of men in these places. If you are part of a tourism attraction in a city, or in nature, where young women feel uncomfortable when they’re travelling, that will potentially reduce your appeal – because they don’t want to have to put up with that stuff.”

When asked by Chris Nassetta if there was anything that he missed about travelling, President Obama joked about having to wait on the tarmac or in traffic, unlike his experiences with Air Force One or a presidential motorcade. More seriously, he referred to the running joke of media and the general public while in office that he was always on vacation when he went abroad, but really this was about people-to-people diplomacy.

“What I understood was that part of diplomacy is letting other people know that you recognise and appreciate their culture, their history and their stories. When people feel as if they are not understood and that they are not seen, then they won’t be open to your perspectives either.”

Read more about the World Travel & Tourism Council and its annual Global Summit.