AMSTERDAM – From a revenue perspective, one of the biggest differences in the hostel and comparable hotel operating models is the relative contribution of ancillary revenue sources (or “Other Revenue” in STR jargon) to total revenue. While Midscale and Economy hotels generate the majority of their revenue through rooms sales, hostels generate revenue through two distinct sources: beds and other amenities.

Other amenities vary by hostel. Linen or locker rental, an on-site bar or restaurant, bicycle rental and early check-in/late check-out fees are among the most common features. These optional add-ons help keep hostels affordable and entertaining for guests while providing additional revenue to operators.

Much like ADR and RevPAB, TrevPAB varies by market. Of the three markets in which STR is presently reporting on hostels, Amsterdam has the highest TrevPAB, recording €38.63 for the 12 months ending January 2019 compared to Edinburgh’s €23.69 and London’s €22.13.

12MMA TrevPAB in Amsterdam is on its 13th consecutive month of growth, but the year-over-year increases have slowed from +11.6% in January 2018 to +2.4% in January 2019. This trend is in line with RevPAB, which showed similar deceleration over the same time period. 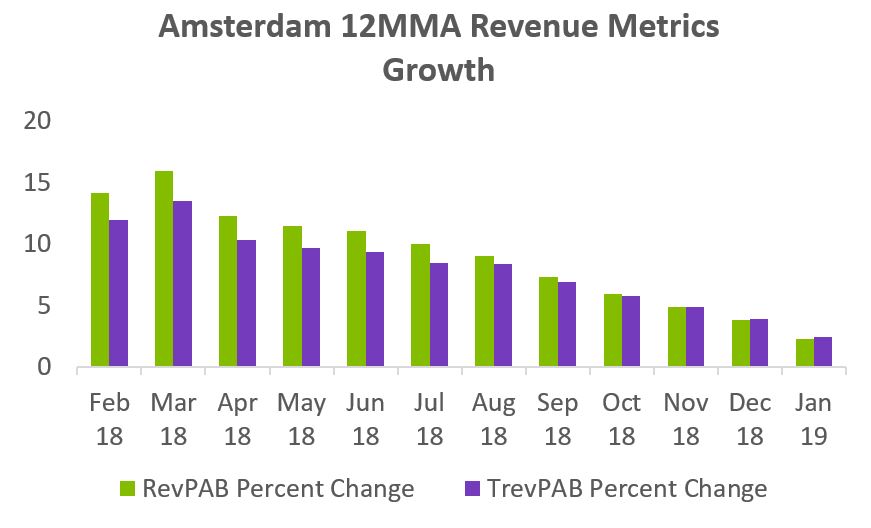 The shifting growth patterns could be caused by the fixed price nature of many hostel amenities. While hostel ADR varies with seasons and events, the prices of certain amenities such as towels, beverages or pet fees may rise over time but are generally fixed in the short run. 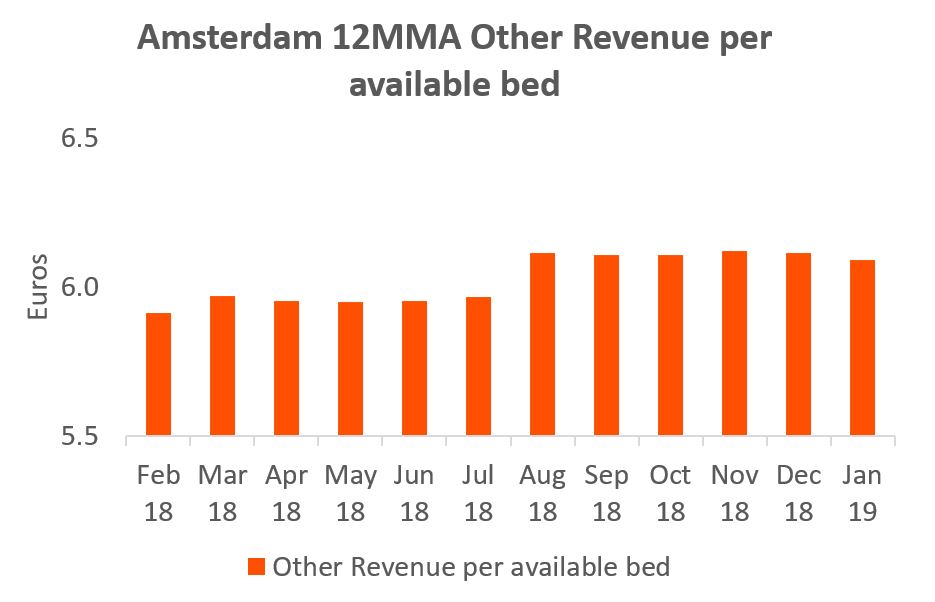 Amsterdam 12MMA ADR growth surged through the first half of 2018, affecting RevPAB and, to a lesser extent, TrevPAB. Other Revenue per bed experienced significantly lower growth rates in early 2018 (1.8% in January 2018 compared to RevPAB’s 13.6%) but steadily increased through the latter half of the year even as RevPAB growth decelerated.

Such revenue trends suggest that as hosteliers dropped bed prices, guests increased their spending on optional hostel amenities. Occupancy hints at this theory as well. Amsterdam hostel occupancy grew more than one percent in only four of the past 12 months, which suggests that an influx of guests is not the source of rising Other Revenue.

As Amsterdam proves, TrevPAB captures revenue streams unique to hostels and offers potential revenue management solutions not available to competitor hotels, making it a vital metric for hostels to track.