Hostelworld, the world’s leading hostel-focused online booking platform today announces that, after 16 years with the Group and 10 years as Chief Executive Officer, Feargal Mooney will step down as CEO. Gary Morrison will become the Group’s new CEO and director also immediately after the 11 June Annual General Meeting. Morrison joins the Group from Expedia where for the last seven years he served in a number of roles, most recently as Head of its Retail Operations. Prior to that he headed up Expedia’s EMEA region presiding over a period of considerable and sustained growth. Morrison has also worked with Google and Motorola. 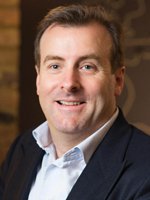 Mooney joined Hostelworld Group 16 years ago, shortly after it was established. He has served as Chief Operations and Finance Officer and, since 2008, as Chief Executive. During that time he has made a singular contribution to the Group’s development, initially in private ownership, before transitioning to private equity and finally steering the Company to a successful IPO in 2015. He has led the globalisation of the business including the development of offices in Shanghai, Seoul and Sydney. He has been one of the leading campaigners for the hostel industry during his time as Chief Executive.

Michael Cawley, Chairman of Hostelworld commented: “Feargal has been speaking with me and the Board about his plans for the long term and consequently some months ago we focused our attentions on succession to facilitate an orderly transition. We are delighted to appoint a candidate of Gary’s calibre and experience to succeed Feargal. Gary’s experience of the travel industry together with his track record of growth in an online marketing business make him an ideal choice to drive the business forward and deliver on our ambitious goals. The Board would like to express its profound appreciation to Feargal for his stellar contribution to the Group over the last 16 years. His role in Hostelworld’s development has been crucial and undoubtedly Hostelworld wouldn’t occupy its pre-eminent position in the market were it not for Feargal’s commitment and leadership. He leaves behind a business with significant competitive advantages and momentum. We wish him every success in his future endeavours.”

Feargal Mooney commented: “Leading Hostelworld from start-up to PLC has been a real honour and I’ve loved every step along the way. It has been, and continues to be, a really fun and interesting business, and I’ve had the privilege of working with some enormously talented and supportive people over the years I’ve been here. After sixteen years developing the business, ten as Chief Executive, I believe that a change will be good for me personally and for Hostelworld. I am proud to have been a part of bringing Hostelworld this far and in particular to have progressed the key strategic pillars which formed the basis of our stock market flotation in 2015. I am delighted to hand over to Gary Morrison to whom I extend my congratulations, and I am confident that Gary and the team will lead Hostelworld to even greater levels of success in the years ahead.”

Gary Morrison commented: “I’m honoured and grateful to the Board for the opportunity to lead this exceptional business. The Hostelworld Group has been very successful at delivering social travel experiences for almost 19 years, and I am looking forward to working with the Hostelworld team, the Board, Hostellers and our partners to deliver the next phase of growth”.