As part of the world’s largest budget accommodation network, YHA Australia has fully embraced 2017 as the UNWTO’s International Year of Sustainable Tourism for Development. Even though the Hostelling International member has had an official environmental policy in place for more than 15 years, this year YHA Australia kicked their efforts up a notch with a new Sustainability Action Plan to fully integrate the initiatives into their business planning.

“The plan encompasses all layers of the organisation – from the Directors setting strategy, down to the chickens laying fresh eggs for our guests at Port Stephens YHA,” said YHA’s Operations Manager Robert Henke.

A solar water heater is installed at Pittwater YHA, outside Sydney

YHA Australia’s brand reflects its respect for the environment, down to the tree in the company logo. However, that doesn’t mean sustainability initiatives will immediately take off. The key to a successful sustainability plan, according to YHA Australia, is to bring customers onboard.  “It is vital that we bring our guests along on the green journey, with initiatives such as ceasing the sale of bottled water from vending machines at key hostels and installing drinkable water fountains instead, which has been enthusiastically taken up,” Henke explained.

A major initiative YHA Australia has implemented since 2010 is a crowd-funded Sustainable Hostels Fund, to which guests can voluntarily contribute $1 per booking on their website.  YHA then matches these contributions dollar-for-dollar and uses this money for green projects at hostels around Australia to reduce energy consumption, emissions and waste.  Over the past seven years, YHA’s guests have raised over a quarter of a million dollars for these projects.

This year, YHA Australia was awarded the Global Youth Travel Award for Best Green Accommodation Initiative. The award was announced by WYSE Travel Confederation during the 2017 World Youth and Student Travel Conference (WYSTC) in Montreal. 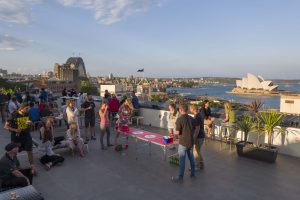 Solar panels were installed at Sydney Harbour YHA Australia in 2017

Judges for the award remarked on this year’s competitive entries for the Green Accommodation category. Henke said YHA Australia is proud their deep commitment to sustainability is being recognised industry-wide.

“Although YHA is well-established, with a history spanning nearly 80 years in Australia, we are constantly striving to innovate, and to minimise our impact on the environment. YHA’s origins are as an early environmental movement, with the aim to educate young people about others and the world around them – this ethos still holds true today and forms the basis for our organisation’s mission statement,” he said. “To be recognised on the world stage at WYSTC for our green initiatives is an incredible honour.”

YHA Australia’s efforts are also paying off with money saved and guest satisfaction. The hostel chain has cut electricity usage and the carbon footprint of overnight guests by about 10 percent. The organisation said that at a time when electricity costs have been increasing throughout the country, YHA Australia has saved approximately $200,000 per year. Since they are a not-for-profit business, the savings are reinvested into improving YHA’s properties and services for guests.

Henke said organisations wanting to start their own sustainability initiatives should look to small, achievable actions that over time can have a big impact. He recommends a swap shelf to keep unwanted clothes and items such as sunscreen or shampoo from going to the bin. Also, events that guests can get involved in can be a big success. YHA Australia organises clean up days for guests to lend a hand in the local community. For bigger sustainability projects within the hostel, such as solar panels, check to see if funding is offered by your local and national government.

Overall, Henke’s advice is to not delay because, “from little things, big things grow.”