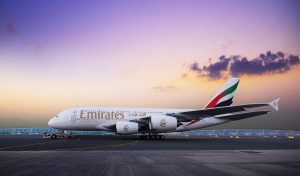 Emirates, A WYSE Travel Confederation Elite member, is named among the top airlines with the lowest aircraft noise and fuel pollution levels. The UAE-based carrier was listed number 8 of the 50 busiest airlines – which indicates the carrier is counted as one of the cleanest and quietest in the world.

The list is part of the Fly Quiet and Clean programme of the London’s Heathrow airport and ranks airlines based on several categories, including noise performance during night flights, as well as pollutant levels that aircraft engines emit.

British Airways came first in the list, emerging as the quietest and cleanest airline, while Israel’s El Al was rated the worst. The top ten list also includes Aer Lingus, Scandinavian Airlines, Finnair, American Airlines, United Airlines, Delta Air Lines and Iberia. Emirates was also recently named the ‘Best Airline in the World‘ at the TripAdvisor Travellers’ Choice Awards for airlines. The airline is a partner with WYSE Travel Confederation in the New Horizons survey, which is the only recurring survey of the youth travel market. Emirates has offered two free flights to a lucky respondent of the survey.