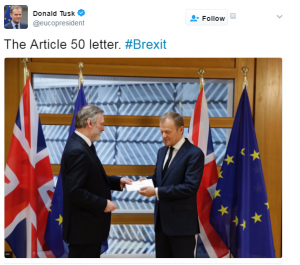 The UK tourism industry has, perhaps unsurprisingly, called for tourism to be top of the government’s agenda as Brexit negotiations begin. Prime minister Theresa May today officially notified the European Union of the UK’s intention to leave the club, triggering Article 50 of the Treaty of Lisbon. This in effect fires the starting gun on two years of negotiations as Britain seeks to extricate itself from the EU.

UKinbound has written to the secretary of state for culture, media and sport, Karen Bradley, highlighting the key priorities for the UK travel and tourism industry during the two years of Brexit negotiations. The tourism trade association stated Britain must seek an immigration system flexible to business needs, arguing EU employees are vital to the operation of the hospitality industry. However, with May contending Britain will leave the EU free trade area, some restrictions in immigration, from both Europe and worldwide are likely, if not inevitable.

UKinbound has also called for continued access to the Open Skies Agreement, calling it a vital driver of inbound tourism to the UK. The body argues the agreement has enabled the expansion of transatlantic and intra-EU flights, allowing carriers to introduce lower fares and providing consumers with a more convenient and efficient service. Again, with the UK leaving the free trade area, it is likely UK-based airlines will be expected to move significant operations to European bases in order to maintain access to the agreement. Perhaps most importantly, UKinbound has called for visa-free travel between the UK and the EU.

UKinbound’s chief executive, Deirdre Wells, explained: “In 2016, international visitors contributed over £22 billion to the UK economy and for this success to continue we require the help and support of the government to ensure our industry can flourish in years to come.”

At the same time, ABTA, has called for a “successful” Brexit. Alan Wardle, director of public affairs with the organisation said: “Things we take for granted, such as the ability to travel without restriction across Europe and flying to many destinations, will need to be secured come Brexit day. “We have been arming the government with facts and figures to empower their negotiations and will continue to do this over the coming months. We are in unchartered waters and inevitably there is going to be some nervousness. It is important the government helps maintain business and consumer confidence in travel at a time of uncertainty. Getting agreement on transition arrangements will be part of that but we also need to be wary about fear-mongering and doom-saying tactics.”