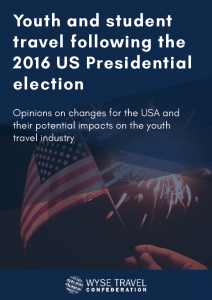 The youth and student travel industry’s business outlook is pessimistic following the election of Donald Trump as the next president of the Unites States of America, according to results of the WYSE Travel Confederation survey of the industry. Over 60% of respondents think that their business prospects will be worse or much worse under Trump.

Visa and immigration regulations along with economic uncertainty top the concerns for businesses over the short and long term.

“Let’s hope for the best, prepare for the worst,” said one respondent.

Others have already seen negative effects on their business.

“…it’s difficult to see how Donald Trump will have a positive effect on a business sending youth travelers to the US. We’ve already seen withdrawals and a dip in interest in travelling to the US.”

Respondents expect business volumes to decrease over the coming year, with the exception of organisations sending travellers from the US anticipating an increase in business volume. Commentary from respondents combined with positive effects on outbound travel by those in the work experience and internship sector specifically suggest a potential uptick in outbound Americans motivated to leave the country, even if just temporarily.

“The only positive could be a long term increase in US outbound travel for young people.”

Request a FREE COPY of the survey findings

The findings of this latest WYSE survey paint an even darker picture following the United Kingdom’s Brexit referendum where a WYSE Travel Confederation survey on Brexit found that 45% of youth travel organisations believed their business prospects would be worse as a result of the vote in favour of the UK leaving the European Union.