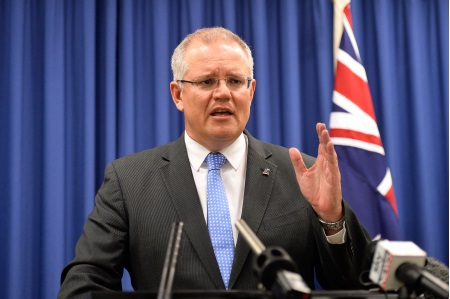 The furore over the backpacker tax could soon be over, with federal Treasurer Scott Morrison announcing the Coalition will compromise again on the rate, and push for 15 per cent.

The Coalition has already reduced its original 32.5 per cent rate to 19 per cent, after widespread backlash from farmers and tourism operators, who fear it will drive backpacker workers away from Australia.

Labor remains committed to a 10.5 per cent backpacker tax saying that is the only rate that will restore Australia’s competitiveness and international reputation among backpackers.

Mr Morrison said the reduced rate would cost the federal budget $120 million over four years and he accused Labor of being responsible for delaying a resolve.

“Frankly the Labor Party can go and take a flying leap,” he said.

When asked what his message was to farmers who are furious at the Coalition for its handling of the backpacker tax, he replied: “The matter is sorted this week”.

Shadow Treasurer Chris Bowen called Mr Morrison “immature” and “cranky” and said “the price has been paid by regional and rural Australia.”

However, the revised bill looks set to pass the Senate with the support of key crossbenchers including Derryn Hinch and those from the Nick Xenophon Team.

Senator Xenophon described the result as a “win-win” because the Government had backed his plan to allow Australian seasonal workers on Youth Allowance or New Start to earn up to $5,000 without a penalty.

“It is a big breakthrough and removes the disincentive for people on unemployment benefits to do that seasonal work where there are genuine labour shortages,” he said.

The backpacker tax debate has dragged on for 18 months and reached a tipping point over the weekend when Nationals MP Andrew Broad broke ranks and called for a 15 per cent rate.

The move infuriated many within the National party, who were confident that Labor would eventually agree to 19 per cent.

Assistant Minister to the Deputy Prime Minister Luke Hartsuyker, who has played a key role in backpacker tax negotiations, this morning told reporters that Mr Broad “for a very long time” advocated a 19 per cent tax rate.

He also reiterated his personal support for that figure.