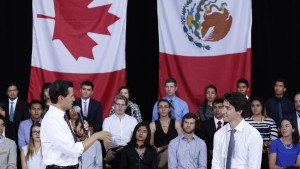 The Government of Canada remains committed to ensuring that young Canadians receive the education and training they need to prepare for the jobs of today and tomorrow.

International education is at the heart of Canada’s current and future prosperity and will help to strengthen the middle class and those working to join it.

Today, President Enrique Peña Nieto and Prime Minister Justin Trudeau announced their intention to make it easier for students to travel back and forth between Canada and Mexico on exchange.

The two leaders welcomed new partnerships between Canadian and Mexican educational institutions that will increase the flow of students, ideas, and opportunities between the two countries.

As part of this new partnership, the President and the Prime Minister announced their intent to foster international work-integrated learning opportunities for students from Canada and Mexico, which will allow more young Canadians and Mexicans to have access to meaningful work at the beginning of their careers.

“Education is a passport to greater opportunities, stronger relationships, and a better future. Today’s announcement will expand our people-to-people ties for generations to come, and give young Canadians and Mexicans the opportunities they need for the future they want.”
—The Rt. Hon. Justin Trudeau, Prime Minister of Canada