Qatar Airways CEO Akbar Al Baker has recently commented on the Australian government’s proposed introduction of the infamous “backpacker tax”.  Extending his support to the proposal, he says “Each country has its own vision and plans, and each country is also free to attract the kind of people they want.”

What is surprising however is Al Baker’s position on backpackers in general, stating that “backpackers are not wanted in Qatar” and was further quoted in the Herald Sun (Australia), May 5 2016:

“We want to attract people of a higher standard,” said Mr Al Baker.

“We like to attract all kinds of tourists as long as they are there for relaxing times, want a unique experience, want to see the culture and are very keen on the arts side of tourism”.

“Normally the backpackers are just there to lie on the beach and spend as little as possible.”

It is disappointing that Mr. Al Baker does not recognize the value of this important market sector and the opportunities of attracting young people to Qatar.

According to data released by the WYSE Travel Confederation and the United Nations World Tourism Organistion (UNWTO), youth travellers represent 23% of international travellers and in 2014 generated more than USD 285 billion towards international tourism receipts.

The WYSE Travel Confederation Millennial Traveller research in 2014 indicated that young travellers spent an average of USD2,160 on their main trip, in comparison to USD 1,097 per trip for international tourists as a whole in 2013.  This is mainly underpinned by the fact that young people take much longer trips than most other tourists, spending up to two thirds more on average.

WYSE Travel Confederation research further unveils that young travellers highlight a major motivation for travel is to increase their knowledge and experience everyday life in another country and contact with local people and their culture was particularly important. 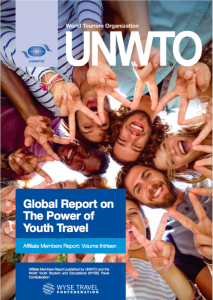 Considering Mr Al Baker’s also states that “we like to attract all kinds of tourists as long as they are there for relaxing times, want a unique experience, want to see the culture and are very keen on the arts side of tourism”, youth travellers would be an ideal visitor.

So, with destinations around the world increasingly recognising the positive economic, social and cultural impact youth travellers have on their destination, WYSE Travel Confederation calls on Mr Al Baker to contemplate the significance of the youth travel sector and how attracting young people to Qatar could have long-term benefits for the country. Perhaps Mr Al Baker would like to read the latest Power of Youth Travel that was published in conjunction with the UNWTO in 2016. This document outlines the significant social and economic impact youth travellers can have on a destination.

We further invite Mr Al Baker to join us at the World Youth & Student Travel Conference, this year taking place in Belgrade, where Emirates Airlines are one of our main sponsors.