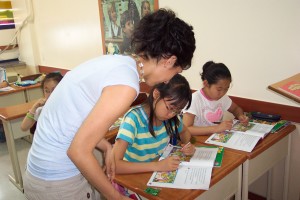 The German Youth Council, DNK, and the European Youth Forum have called on Germany to allow young volunteers and pupils to be part of new proposed EU visa rules. The organisations are making this call, along with other German civil society and youth organisations, in a meeting with the Ministry of Interior in Germany.

The proposed EU “Visa Directive” – the legislation which sets out how researchers, students, pupils, volunteers, trainees and au-pairs can come into the EU for a period of up to 12 months – is now being negotiated by the European Commission, the European Parliament and the Council of the EU. The Council’s position – pushed for by Germany – goes against the proposal of the Commission and the position of the Parliament in that it removes volunteers, pupils, trainees and au pairs as mandatory categories to be included in the Directive.

The European Youth Forum and DNK call on Germany, and on other Member States to rethink this position. International youth mobility makes a vital contribution to intercultural understanding across the globe, and to young people’s skills development. But there are currently too many barriers in place for non-EU young people to come to the EU for study, volunteering and other learning opportunities. Not including volunteers or pupils adds little value to the revision of the Visa Directive as a whole.

As well as the personal and socio-cultural benefits of youth mobility, pupils and volunteers contribute to Europe’s economic growth. In many countries, volunteers represent the equivalent of up to 5% of the economically active population.

The civil society group that is meeting with the Germany Ministry of Interior has also put forward further demands, such as no visa fees for participants of non-profit activities, as well as the possibility of intra-EU mobility for those that have been granted a Visa.
Tobias Koeck, Chairman of the DNK, comments:

“It’s obvious and a matter of European solidarity for us, to support this initiative of the European Youth Forum together with its member organisations to include volunteers and pupils in the Visa Directive. Beside Germany, all other Member States recognized the value of this: fostering the mobility of young people, the inter-cultural exchange and engagement of the civil society. No matter if it’s in the non-formal, informal or formal scope of learning and education.”

“There are clear personal, social and economic benefits when young people participate in volunteer activities and pupil exchanges abroad. Excluding volunteers and pupils from the Visa Directive means shutting them out of Europe and the inter-cultural learning opportunities that these kinds of experiences can bring. That is why we have joined forces with German civil society to call on Germany to rethink its position and include these groups in the Directive.”