Wildlife watching tourism is one of the most important tourism segments in Africa, according to new UNWTO research released on the occasion of World Wildlife Day. In view of tourism’s potential in advancing inclusive growth across the continent, poaching and illicit trade in wildlife pose a serious threat to the future of Africa’s socio-economic development, the publication warns.

In support of international efforts to tackle unprecedented levels of poaching and to strengthen the role of tourism vis-à-vis wildlife crime, UNWTO is spearheading efforts to increase knowledge on the economic value of wildlife watching in Africa. Towards Measuring the Economic Value of Wildlife Watching Tourism in Africa, provides a first overview of this segment, its economic impact and the current involvement of tourism in anti-poaching measures.

“Poaching is not only destroying precious ecosystems, it also poses a serious threat to socio-economic development. The loss of biodiversity is directly linked to lost development opportunities in the African tourism sector, which provides livelihoods for millions of people”, said UNWTO Secretary-General, Taleb Rifai in his message on the occasion of World Wildlife Day.

UN Secretary-General, Ban Ki-moon said “Illegal wildlife trade undermines the rule of law and threatens national security; it degrades ecosystems and is a major obstacle to the efforts of rural communities and indigenous peoples striving to sustainably manage their natural resources.” 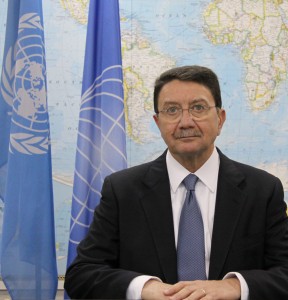 The research also brings further insights into the economic significance of wildlife watching tourism. Alongside generating crucial income for protected areas through entrance fees, a typical wildlife watching tour costs on average USD 433 and captures an additional USD 55 in out-of-pocket expenses per person, per day. In addition, tours often include locally hired services such as accommodation, transportation, tour guides and cultural performances, creating important job opportunities for the local population.

Tourism authorities are only involved to a minor extent in anti-poaching efforts and there is room for improvement, the paper indicates. Around 50% of the participating tour operators are funding anti-poaching initiatives and/or engaging in nature conservation projects, however only a few are so far proactively informing and engaging their customers on the issue.
“Given its economic importance, the tourism sector can and should play a key role in raising awareness among both policy makers and tourists on the devastating impacts of wildlife crime, and help finance anti-poaching initiatives. UNWTO remains deeply committed to mobilizing the international tourism community on this critical issue, which requires our immediate action“, added Mr. Rifai.

In order to advance knowledge of the economic importance of wildlife watching and its potential to directly contribute to conservation efforts, the paper recommends a number of actions for national tourism authorities, including increased involvement in anti-poaching initiatives, systematic integration and evaluation of available data, and capacity building for a more consistent monitoring of protected areas visitors and receipts.

Towards Measuring the Economic Value of Wildlife Watching Tourism in Africa builds on a survey of 48 African tourism and conservation authorities from 31 countries, as well as 145 international and African-based tour operators. The survey has been complemented with available statistics, case study reviews and in-depth interviews with governments and international organizations.