For specialists in the youth travel market, this growth in international arrivals may come as no surprise. “The number of international trips that young people take increases consistently with age and travel becomes an established part of their lifestyle,” said David Chapman, Director General of WYSE Travel Confederation. “Young travellers are likely to return to the destinations they visit throughout their lifetime, so the impressions that a destination makes on them early in their travel careers are lasting.” 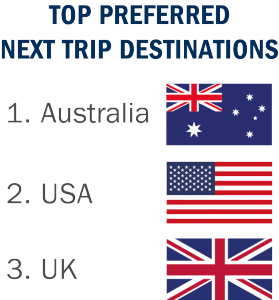 UNWTO’s figures translate to 7.2 million more youth travellers so far this year when compared to the same eight-month period in 2013. Findings from our newly released Millennial Traveller survey corroborate with UNWTO’s growth figures for regions such as North America and Oceania. The United States was the most frequently mentioned last destination visited by millennial travellers that participated in the study conducted earlier this year. Australia was ranked as the top preferred next trip destination by millennials.

Further commenting on UNWTO’s international tourism figures for the first eight months of 2014, David Chapman said, “China’s leading position in terms of expenditure as a source market continues to present opportunities for the youth travel industry.

WYSE Travel Confederation’s research, however, has also shown there are still challenges to overcome in order to further promote youth mobility in the Chinese market. 28% of the Chinese millennial travellers who participated in the study reported barriers to travel that were related to visa regulations; this is significantly higher than for young travellers in general.

Destinations and service providers alike would be wise to pay special attention to the factors affecting young travellers and the unique types of purpose-driven travel that they undertake. This thriving market offers a wealth of opportunities to the global travel industry as a whole.

To find out more about the trends, travel behaviours, experiences and attitudes of this young and influential group of travellers born between the early 1980s and the early 2000s, download the Millennial Traveller report, which was launched last week.

WYSE Travel Confederation members can request the report free of charge, while a free Executive Summary is available for non-members to download:

To view our full range of research covering different aspects of the youth, student and educational travel market, click here.