Students are studying abroad more than ever before, according to an Institute of International Education report released on 17 November.

According to the report, nearly 300,000 American students studied abroad for credit between 2012 and 2013, a two percent increase from the year prior. What’s more, the number of US students studying abroad more than doubled in the last 15 years.

But an even more notable trend: non-European destinations are growing in popularity. 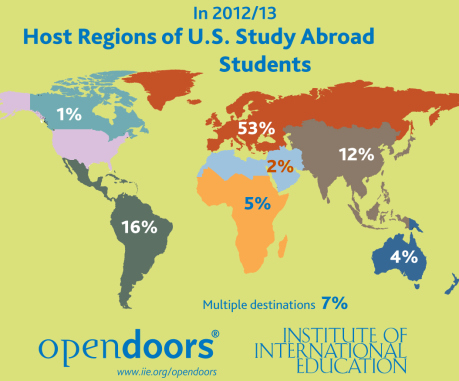 Of the 25 top-ranking destinations for U.S. students studying abroad, four have experienced double-digit growth numbers. And three of those four are located outside of Europe — South Africa with 17.6% growth, South Korea with 12.9% and Peru with 10.3%. Denmark, the only European country to experience double-digit growth, saw 14.8% growth. 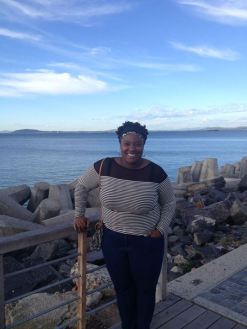 “Travel has become extraordinarily more commonplace in comparison to decades prior with Europe becoming increasingly accessible to the point of tedium,” says Chrislyn Laurore, a Mount Holyoke College junior who studied abroad in South Africa this semester. “Study abroad programs in South America, Asia and Africa offer admission into some of the farthest reaches of the planet, promising adventure, natural wonder and exoticism – something different and an opportunity to exist outside of one’s habitual bubble.”

Kelly Lussier, a senior at Loyola University Maryland who studied in Beijing for the fall 2013 semester, echoed that sentiment.

“The idea of studying in Europe felt comfortable and safe, and this was an experience that I wanted to be the opposite of that,” says Lussier. “China was terrifying and exciting, which was what I was looking for.”

That said, some students cite the relative ease of traveling within Europe as a key reason for the region’s continued popularity among US students studying abroad.

“I think that Europe is the easiest place to study abroad,” Maura Lapoff, a senior at the University of Miami who studied abroad in Turkey, says. “As any nervous parent can attest to, Europe implies a certain level of ‘safety’ and ‘modernity.’ Also, and the language barrier is not as severe. Students trust European academic standards and it can be hard to find certain academic requirements in English outside of Europe.”

Despite Europe’s sustained status as a study-abroad hotspot, some students feel that the popularity of non-European destinations will continue to gain traction.

“As globalisation continues and the economies of Asian countries expand, students are realizing that understanding the languages and cultures of countries outside of Europe will give them a more competitive advantage when looking for jobs, particularly in business,” Maître says.

But Jack Welty, a junior at Georgetown University, says some student have been driven to non-European study abroad locations for financial reasons.

“I think there’s definitely a financial aspect,”  Welty says. “In the last five years or so the Euro has been very strong against the dollar, so that’s an incentive to find somewhere else to study.”

Additionally, Welty says he made the choice to study in Buenos Aires based on the Europe’s accessibility.

“I think studying abroad in Europe would be a blast but part of me feels like Europe will always be relatively accessible to travel for the rest of my life, whereas I don’t know how many other opportunities I’m going to have to live in South America,” he says.

Despite these students’ glowing reports on their non-European experiences, they said reception of their “alternative” study abroad plans was not always positive.

“The reactions were always the same: excitement when I mentioned that I would be studying abroad,” Maître says. “When I would mention China, however, their once positive reactions turned negative. Without fail people commented on the negative aspects they had consumed in the media: Communism, pollution, crime, poverty, etc. Rarely did someone acknowledge the historical and artistic significance of China. In addition, people never failed to ask why I wasn’t studying somewhere in Europe.”

“People responded fairly enthusiastically to my decision to study abroad,” Laurore says. “This enthusiasm was rapidly accompanied by shock once I revealed that I would be spending my semester abroad in South Africa…. Most people immediately conjured grossly incorrect but age-old one-dimensional depictions of the African continent as a no-man’s-land plagued by violence and disaster, assuming that I would be living out of a hut riding elephants and lions to school. Little did they know that I would be studying at one of the finest universities in the world in a large city that far surpasses the population of my hometown in south Florida.”

Julie Nicols, a Fordham University  senior who spent the spring 2014 term in Morocco, says she thinks interest in non-European countries may be a short-term trend.

“(Growing interest in non-European countries) may due to globalisation and just a greater general knowledge about different cultures,” Nicols says. “However, I also wonder if its more of the trendy decision right now and if it will die out in the future.”

Still, students were optimistic about sustained interest in studying abroad outside of Europe.

“I think people want to take advantage of this opportunity to really expand their worldview to drastically different places and cultures,” says Lindsay Smith, a senior at Boston University who spent a semester in Ecuador. “This is something that is so important and stressed in today’s society as well as college – to acquire a worldview and to have a ‘global’ mindset. I think this is only becoming more and more stressed in college and society so this will cause this trend (of growing interest in non-European destinations) to continue.”

“I think that more people should look outside of Europe,” says Samantha Fezza, a senior at University of Miami who spent the spring 2014 semester in South Africa. “You’d be surprised that there are beautiful places all over the world. By limiting yourself to Europe, you really aren’t stepping outside of the box.”