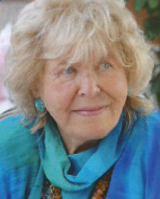 We regret to inform you that Elizabeth Johnson, who was a prominent figure and Vice Chair of FIYTO – one of WYSE Travel Confederation’s founding organisations – in the past, sadly passed away on 17 September 2014 at the age of 92.

We know that many people associated with WYSE Travel Confederation, WYSTC and FIYTO will have known Elizabeth and for those who would like to know more, follows is some more information about her life as provided by the Elizabeth Johnson Organisation:

Elizabeth started EJO (The Elizabeth Johnson Organisation) in the early 1960s, working first from her home and later from offices in Haslemere, Surrey in the United Kingdom. She was an accomplished linguist who had a deep understanding of the importance of language and also of the very simple truth that young people learn more quickly when learning is fun.

Elizabeth withdrew from the day to day running of EJO in 2001 but the standards that were so close to her heart continue to remain central to its ethos.
Elizabeth was born in Vienna and came from a theatrical background. She was passionate about music and many will remember her singing at gatherings associated with meetings and conferences.

Over recent years, she made a number of CDs and in 2011 published a book, ‘Rosl’s Daughter’, about her childhood and early life in Vienna, Amsterdam and Bucharest.

Elizabeth died in Vienna, after spending two days preparing for a live programme to be broadcast on Austrian radio on 18 September to mark and celebrate the launch of the German version of ‘Rosl’s Daughter’.

Elizabeth was an energetic, vibrant and colourful figure and a warm and generous person who will be remembered by many and will be greatly missed.

“We send our sincere condolences to Elizabeth’s friends and family.”