Airlines are rushing to equip aircraft with WiFi believing passengers will demand connectivity onboard. But who are those customers? More importantly, do they really intend to pay for it? 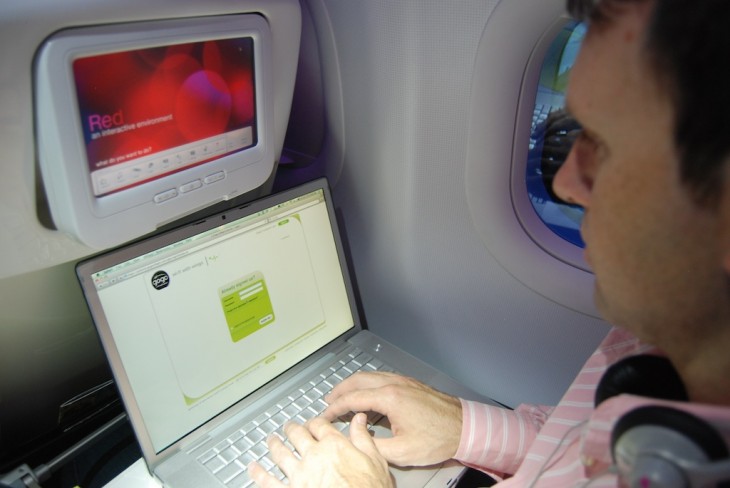 The mention of ‘Millennials’ streams from headline-grabbing service providers and industry pundits with great frequency and at higher speed than even the most advanced connectivity options.

The presumption is that Millennials, as the up-and-coming generation, will view connectivity as a product differentiator, that connectivity will drive their choice of airline.

“Wi-Fi to Millennials is like air—free,” Chris Nurko, Global Chairman of FutureBrand tells us. In his view, airlines will need to give some level of free access to the service in order to meet the needs of that generation.

Nurko sees an opportunity for monetisation of the technology through a tiered system.

“It’s the quality of oxygen that matters,” he tells us, “speed and security features will matter. [Millennials] will pay for added features or for what they download. The term ‘free-mium’ services is what they will want [consisting of] free basic services plus premium as required.”

Airlines may flinch. The costs of installing the equipment to support connectivity, are high; but they might consider Norwegian when calculating their connection rates.

“The world is getting more and more connected,” says Charlotte Holmbergh Jacobsson, Communications Manager at Norwegian. “In 2011, when we launched Wi-Fi, airplanes were one of the few places where there was no Internet. We wanted to be prepared for the future and meet the demands of the younger generation.”

Norwegian has Ku-band Wi-Fi installed on nearly 90% of their fleet. About 35% of their passengers use the onboard Wi-Fi, depending on route and season. “The longer the flight, the higher the uptake,” says Holmbergh Jacobsson.

Though Norwegian believes, “Wi-Fi is for everybody,” their reasons for making Wi-Fi a service rather than a revenue stream are not entirely altruistic. “We find that the inflight Wi-Fi gives us a huge competitive advantage as it gives our passengers the opportunity to work, read online newspapers, play games or watch online TV while flying with us,” Holmbergh Jacobsson tells us.

The decision has paid off for Norwegian, in goodwill and exposure. They’ve won international acclaim for their Wi-Fi service, raised a few eyebrows in the industry for their bold move to give the service away, and won “Best Inflight Connectivity and Communications” in the Passenger Choice Awards 2012 and 2013.

The fate of the pay-for-usage model

The success of Gogo’s service proves passengers will pay for onboard, connectivity, if they have to. But there’s reason to question whether that practice can endure.

Older generations, even those not that much older than the Millennials, will remember the considerable efforts and expenses airlines incurred to accommodate Airfone equipment on aircraft.

That service provider, and their competitor Air One, eventually gave up. (Though Gogo bought what remained of Airfone and repackaged it as Aircell.)

Because both of these services depended on high by-the-minute rates for revenue, most passengers decided their calls could wait until they were back on the ground.

Without that usage revenue, the providers just couldn’t make it.

‘Fees’ are so yesterday

The global trend is moving towards universal internet access as a right, not a privilege. With free Wi-Fi commonplace, and many hotels already adopting the “free-mium” service model Nurko suggests, aviation may already have missed the window of opportunity where by-usage billing for Wi-Fi could be a successful venture.

The window was tricky for aviation to gauge, or accommodate. The drop in travel after the catastrophic events of 9/11, and the subsequent damage from the global financial crisis, made any early attempts to equip aircraft with Wi-Fi impractical.

Boeing tried launching their Connexion product in 2003, and killed it in 2006 (burning some airlines) because of the product’s overall low adoption rates.

Despite the mass enthusiasm at recent announcements from suppliers — akin to Steve Jobs rising from the dead to reveal a game-changing Apple product — we have yet to know how much better today’s market conditions are.

Slow on the uptake

JetBlue’s proprietary Fly-Fi service offers variable speeds through a combination of the ‘free-mium’ services Nurko suggests; but the exact numbers on how many passengers have adopted the Simply Surf (which is only free until June 14) versus the Fly-Fi Plus service at $9 per hour are nearly impossible to pin down.

JetBlue isn’t alone. Few of the connectivity providers, or the airlines providing services, will divulge these numbers in concrete terms.

We count ourselves lucky to have had an honest answer from Norwegian, but let’s closely consider the implications of that answer.

A 35% uptake on the free high-speed service Norwegian offers is telling; it leaves 65% of passengers who have other uses for their time onboard. It could further be argued that the rate is only so high because, as the airline states, Norwegian’s customers use Wi-Fi for entertainment. Nurko believes this is a smart tack.

“The airlines should focus on content for downloads and bespoke services,” Nurko tells us. “Access for unique content, features and deals will be a means of differentiation.”

This is also the approach Southwest favors, putting emphasis on the LiveTV and movies-on-demand service from their partnership with Dish Networks. The Wi-Fi access, at $8 a day per device, is a by-product of the same high-speed connection which makes that In-Flight Entertainment (IFE), on passengers’ personal electronic devices possible. Entertainment is the carrot, and Wi-Fi access is a sugar cube for good measure.

JetBlue had enough success with their LiveTV to sell it on to Thales, recovering their development costs and making a nice profit.

During a recent press event, at the Aircraft Interiors Expo, we asked Thales whether they might consider buying JetBlue’s FlyFi service at some future date.

They choked a bit, looked befuddled, then answered “no.”

It’s worth noting that later Thales announced they had gained the right to be an official Inmarsat GX Aviation Added Value Reseller during the same show. Thales do see value in using a connectivity service to increase the diversity of content available on their IFE products. But, let’s face it, saying they would even contemplate a Viasat-powered product would have been—awkward.

Thinking beyond connectivity in passenger experience

Unlike Airfone, connectivity services (especially satellite based connectivity) may have a use for aviation which is far more critical than passengers’ needs to stay connected to the ground.

With the disappearance of MH370, there is a call for advanced tracking of aircraft, and expediting of NextGen flight-management systems.

While there is heated debate on how that could best be achieved, this April 1, IATA called on the industry to dedicate a task force to this issue, and recommended that ICAO contribute.

The ultimate solution will likely involve enhanced satellite connectivity. Equipping aircraft would become a requirement, regardless of whether Wi-Fi becomes the great differentiator for airlines.

If these requirements come through, the best hope for airlines to recover costs is not to bank on a purported Millennial addiction to connectivity, but rather on the lucrative option of Live and on-demand entertainment.

As a by-product, airlines could offer limited free Wi-Fi access to meet the needs of those Millennials and other frugal travellers. Airlines could also justify a fee-based premium Wi-Fi service for those who intend to get some work done, and whose connection costs are covered by corporate.

When the numbers are crunched, leaving Millennials out of the equation, Nurko’s ‘free-mium’ service could prove to be the sound approach for airlines, and the most profitable. If so, airlines who select the supplier who can provide the highest bandwidth, with the greatest possibilities of expansion on that capacity, are likely to win this high-speed race.