Between 2000 and 2010, global participation rates in tertiary education grew from 19% to 29%. More students than ever are attending universities and colleges. It’s in Asia that the biggest changes are taking place. Over the past 20 years, the share of students who went on to graduate with a higher education degree in China has grown from 5% to almost 30%. This is expected to rise to 40% in 2020, bringing it close to the OECD average. In South Korea the enrolment rate in higher education has reached 100%. Chinese students account for 19% of all International students worldwide. It’s the young, and increasingly affluent population of Asia driving this surge. And this growth is relevant to all universities and housing providers, everywhere.

But it isn’t just in Asia. Throughout the world student numbers are on the rise. In Latin America, the figures are almost as high as those in Asia, and even back in Europe, participation in higher education is increasing, actively being stimulated through government policy.

Numbers are increasing, but so is the complexity of global education patterns. The US and Western Europe still dominate, now being joined by institutions in Asia and Latin America. The output of English language research papers from Chinese universities has grown by 17% per year since the year 2000, now surpassing that of the Japanese. The lingua franca for higher education and research throughout Europe has become English. The world of academics is now truly becoming global.

These developments also shake up patterns in the mobility of international students. Traditionally, we’ve seen students from Latin America, Asia or Africa, going to the West (usually the US or the UK) for their education. But patterns are becoming more complex. Europe has been the number one destination for international study for a long time, but Asia is seeing the fastest growth and is increasingly hosting students from the US and Western Europe.

Not only students are becoming more mobile, universities are as well. In order to meet the needs of their students, a growing number of universities are opening up branches abroad. This means students can get a degree at an international school without leaving their home country.

One example of this is in Doha, Qatar. Education City hosts not only local Qatari schools, but also branches from Texas A&M, Weill Cornell Medical College, HEC Paris, Stenden University, among others (mostly from the US). Qatar wants to be a knowledge and research hub for the region. The Qatar Foundation is investing heavily in education, preparing for a world post-oil.

There are many other examples of this broad development. US and UK branches are leading the way with a dozen or so foreign universities throughout Asia already. And it goes in both directions. Last year, Ningbo University announced they are opening a campus branch in Florence, Italy.

Although often on a small scale, these campuses, do represent a development toward more global integration. For students, it is a way to get international experience, without actually going international. Costs play a major role in this. Tuition fees and living expenses while abroad remain a barrier for many. But an American university, for example, can offer Chinese students their programmes at much lower cost when they are located in China.

Hans de Wit, Professor (Lector) of Internationalisation of Higher Education at the School of Economics and Management of the Hogeschool van Amsterdam, notes the increasing importance of cost in study decisions. Students are making critical choices about whether it is worth moving or not. The cost factor for many of tomorrow’s students is real and the importance of online education will increase.

The movement of national education systems towards a global education field means increased compatibility and comparability between university programmes. As Europe adopts the Anglo-Saxon model of higher education (with Bachelor, Master, and Doctorate degrees), other parts of the world are doing the same. There is now a global standard for the organisation of degrees, and thus they can be translated and compared.

Transparency creates options, not only for students, but for researchers and funding too. Universities are finding themselves in an increasingly competitive environment. The competition is not only about attracting students and staff, it is about the ability to attract funding as well. It is no longer ok to be ok – universities must be excellent. Excellence costs money, and public funds are limited.

Comparisons often take the form of rankings. In North America and in the UK, rankings have been common for decades but in continental Europe they are a recent phenomenon. Suddenly, universities are finding themselves on a list along with hundreds of competitors. A university such as the University of Groningen has been a regional knowledge centre for many years. It has produced much serious academic work and numerous good scientists from a student base traditionally pooled from the region surrounding this college town. With increased international transparency its scope is changing. The university is now ranked 89th on The Times Higher Education Ranking, and number 92 on the ARWU, which is published annually by the Shanghai Jiao Tong University. This is quite a switch – from recruiting students in Winschoten to enticing them from Shanghai.

Prospective students get their information from the Internet, a major driving factor in the increase of transparency. But when more information is available, it is hard to see the forest through the trees. Internet start-up companies have been jumping into this market. In Europe, StudyPortals has organised the majority of available study programmes in a user-friendly database. You want an MA degree in accounting in Finland? Here- these are the schools in Finland that are offering that option! Studyportals.eu has over 2.5 million visitors per month, and is growing quickly.

The Internet is not only a place where you can find your school of choice; it is also a place where more and more people can actually attend school. Massive Online Open Course (MOOC) is a fairly new, but rapidly developing phenomenon. It was started by colleges in North America offering courses online, and has since become a term with a lot of swirl in the education industry. Some call it a hype, others predict MOOCs will bring about the end of education as we know it.

The first MOOC was a course called Connectivism and Connective Knowledge, given to 25 students at the University of Manitoba (Canada) in 2008, Over 2,200 joined in from the general public; online and free of charge. In 2011, Standford University offered a series of courses, each with an enrolment of around 100,000. This truly solidifies the M in MOOC.

Dozens of universities are following suit. Courses are accessible through web platforms, such as Coursera.org, which offers over 435 on-line courses from 88 universities. There are almost 5 million students registered on their site alone.

It is not yet clear where MOOCs will go. Their business model is still under development. What kind of traction they will get? And just how is this going to affect education as a whole? Most courses are being offered free of charge, but there is a fee if you require certification. In some cases, these certifications can be transferred as credit for part of a degree course, and so actually replace a physical course. Other sources of income for MOOC platforms include offering access to student data for paying companies who wish to recruit the most talented students.

Is this really what the future of education is going to look like? It remains uncertain for now, but things are changing, and they are changing fast. More complex patterns, more transparency, more competition, more online access. It is all leading to one thing: more education. The world is certainly becoming a smarter place. Student housing providers should take note to fully understand where students will go. 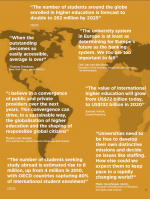