In many countries, youth employment is understood as a pressing domestic issue. But the proper lens is global: From Europe to North America to the Middle East, unemployment among young people has swelled into a veritable epidemic, one that threatens economic growth and social stability in dozens of countries for decades to come.

Worldwide, some 75 million workers under age 25 were jobless last year, according to the International Labour Office, an increase of more than 4 million compared to 2007.

The crisis is altering family dynamics, as parents find themselves caring for grown children and as unemployed young people defer starting their own families. It is reinforcing austerity, as governments struggle to finance unemployment benefits and large numbers of would-be young consumers find themselves hunkering down in joblessness.

Above all, it is assailing the psyches of young people who have been told that education is the pathway to a more prosperous life only to find that their degrees are no antidote to a bleak job market. 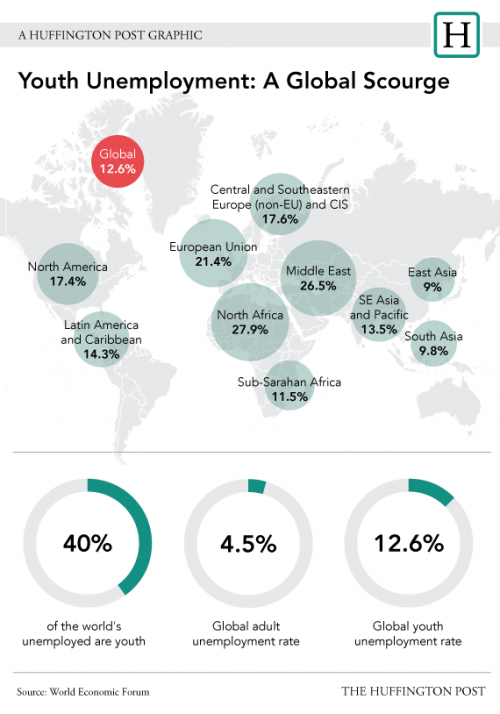 “Youth unemployment is dramatic,” according to José María Aznar, the former prime minister of Spain. Fifty-six percent of would-be Spanish workers under 25 are jobless. “It’s jeopardizing the opportunities for future prosperity and growth.”

The profound shortage of working opportunities for young people around the globe is largely the result of the synchronized financial crisis that emerged in the United States and then spread to Europe, generating economic strains on virtually every shore. Youth unemployment now holds the potential to exacerbate deep-seated social and political tensions while yielding new conflicts in an age of scarcity.

The Huffington Post has deployed its global resources in an effort to capture the scope of this crisis and its many permutations, forging a collective report drawn from newsrooms at international editions in seven countries. This story is intended as the beginning of a sustained conversation about the consequences of youth unemployment, examining the pitfalls and also possible ways out. Future stories will spotlight programs that may yield improvements, as well as the entrepreneurial spirit that is emerging as young people confront pressure to make their own opportunities.

This report focuses on an affected group of particular importance: those who managed to graduate from college yet still find themselves jobless. The costs of this disappointment are crushing for the young graduates themselves, particularly those bearing student loan debt. But it’s society that bears the full costs: From the United States to Spain, experts warn that the side-lining of millions of would-be consumers is placing a substantial drag on economic growth, diminishing prosperity for all.

In Sub-Saharan Africa and the Middle East, the presence of large number of young people unable to find jobs that match their training adds fuel to long-standing ethnic and religious conflicts while sowing political discord. The youth unemployment rate hit 39 percent in Egypt last year, as the country grappled with the fallout from the Arab Spring.

In France, nearly one in four would-be workers under 25 is now officially unemployed, according to the latest government figures. In Great Britain, some 960,000 people in the same age group are unemployed, or about one of every five. Overall, some 26 million Europeans aged 16 to 24 are today searching for a job, according to recent government estimates.

‘HOW AM I GOING TO GET EXPERIENCE?’

Overall, some 2.5 million Spanish workers are employed in sectors other than those for which they studied, according to the General Workers Union. And this dynamic only appears to reinforce itself: As recent graduates take whatever jobs they can find, they have no way of amassing experience in their chosen fields.

Large numbers of youth are now emigrating. Since the crisis began, the number of young Spaniards venturing abroad has increased 41 percent, according to the National Institute of Statistics.

Germany, France and the United Kingdom continue to be the top destinations for these young workers, but Ecuador is rising in the ranks. The small South American country has offered more than 5,000 jobs to college-educated Spaniards this year.