International visits into China are in major decline

Much as attracting Chinese travelers is the number one issue in all of travel worldwide, inbound international tourists into China are, surprise surprise, in decline. That is according to official numbers for the first five months of 2013, released by China National Tourism Administration last month.

Inbound overnight international visitors totaled 22.93 million between Jan and May this year, down 4.06 percent compared to the same period in 2012. This is the third consecutive year these numbers have dropped, even though on a global basis, it is still the third largest inbound tourism market.

This is happening even as domestic Chinese visits internally is in mega-boom, with 998 million visitors in Q1 of this year, up 14.1 percent, with domestic travel revenues at about $124 billion, up 18.4 percent, according to CNTA. 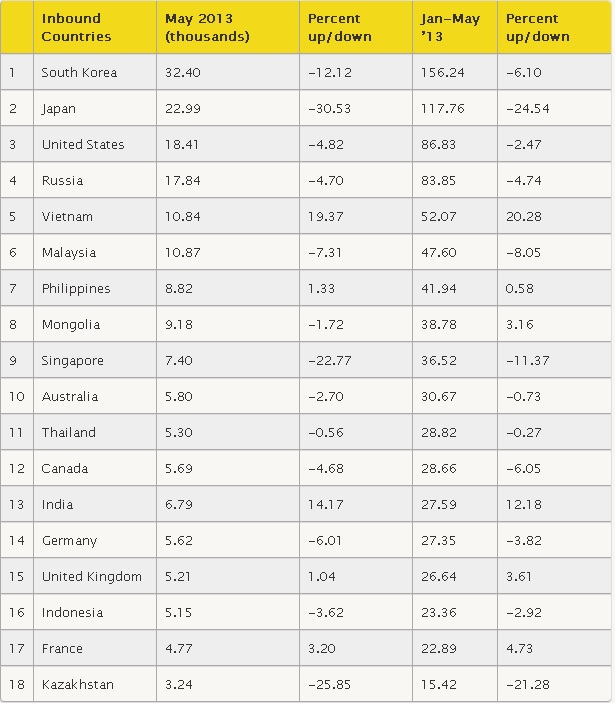 The big Japan drop is easily explained: the continuing diplomatic tensions between the two countries is not helping. As for other countries, the world economy, especially in Europe, remains dicey, and in fact most of these economies are banking on Chinese visitors to their countries to boost their markets.

The Chinese currency is also on the rise against dollar, and the historic price advantage of visiting the country is going away, also a factor in dissuading cost-conscious visitors, especially visitors from Russia who are looking elsewhere in South-East Asia.

As for the actual marketing of China to foreign visitors, it leaves a lot to be desired, especially in developing strategies to attract younger visitors through digital means.